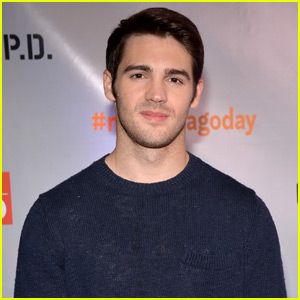 I go to the gym, do some martial arts, and I love poetry. I have a tattoo of my family crest, and another on my back that says 'The Road Not Taken,' which is a poem by Robert Frost.

I love that show. It's my favorite.

I started watching movies my grandpa did, and I saw what an impact they made on the world. That's when I said, 'Hey, I want to do that too.'

Who is Steven R. McQueen?

Steven R. McQueen is an American Actor and Model. Steven is known for his role as “Jeremy Gilbert” until The CW fantasy drama The Vampire Diaries until 2015. He started as Jimmy Borelli in NBC drama Chicago Fire from 2015 until 2016.

Steven is also best known for his role on the TV series Everwood. Steven has also starred in a film called Piranha 3-D as Jake Forester along with stars Elizabeth Shue and Jerry O’Connell.

There is no information on Steven’s educational background.

In 2005, Steven R. McQueen made his Television debut appearing in an episode of short-lived CBS science fiction drama Threshold. He guest-starred on a various television series including “Without a Trace, CSI: Miami and Numb3rs”. One of his most notable roles to date was a recurring role, as Kyle Hunter for seven episodes of the fourth and final season of “The WB” drama ‘ Everwood’ from 2005 to 2007.IN January 2008, he made his film debut in the “Disney Chanel Original Movie Minutemen”  where he played the villainous role of Derek Beauguard.

Steven R. McQueen takes salary $15,000 per episodes and has the Net worth of $3 million.

There was a rumor about Steven R. McQueen that he is a drug addict as he does play roles of addicts. but, it was just rumor, Steven is not a drug addict and doesn’t take drugs. And, he is currently focussing on his career.

Steven has a height of 6 feet and weighs 77 kg. His chest, biceps and waist size is 43-14.5-32 inches. He wears a shoe size is unknown. His hair color is dark brown and eye color is also dark brown.

Natural Medicine and celebrities! Know the pitfalls of sole reliance on these natural remedies for cancer and other deadly diseases!