American actor becomes a politician after joining pro-Kremlin Russian political party. He is a father of seven.

Steven Seagal married Miyako Fujitani in 1974. He had two children namely, Ayako Fujitani, Kentaro Seagal both of whom went on to become extremely popular in their fields.

He left her in 1987. While his divorce with Fujitani was still not finalized, he married Adrienne La Russa.

While he was married to La Russa, he fell in love with Kelly LeBrock and she became pregnant with his child. When this news spread his marriage with La Russa was annulled and he eventually married LeBrock in 1987.

In 1994, Seagal divorced LeBrock quoting ‘irreconcilable differences’. During this time, he started a new relationship with Arissa Wolf, with whom he has a daughter, Savannah.

He is currently married to Erdenetuya Batsukh with whom he has a son, Kunzang. This couple exchanged vows in the year 2001. 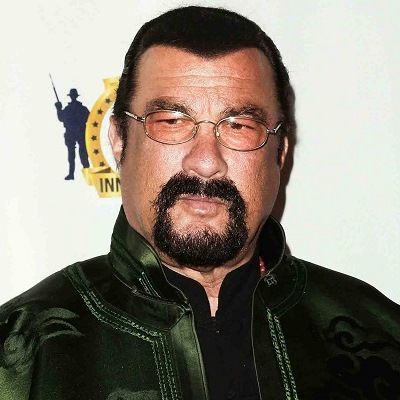 I am hoping that I can be known as a great writer and actor someday, rather than a sex symbol.

I've never met her, but my impression of her is that she's very straight, sincere, honest, really talented president, and I hope she gets re-elected.

Action films are great, but an action film that has characters that are compelling and a story that people can care about is something even better. We love to see action heroes that are vulnerable, that are sensitive, that are family people, that are accessible.

There are millions and millions of people in America who have dual and multiple citizenship. What makes it controversial is all of the propaganda flying about Russia itself

Who is Steven Seagal?

Steven Seagal is a renowned American actor and a 7th-dan black belt in Aikido. He started off as an Aikido instructor in Japan.

He then went on to appear in a number of other films including ‘Under the Siege’, ‘On Deadly Ground’, and ‘Under Siege 2: Dark Territory’.

Talking about Steven’s education history, he attended Buena Park High School. Besides this, he has not revealed anything about her education details.

Then, two years later, he appeared in a mediocre film, ‘On Deadly Ground’, which he also directed. In 1995, he starred in the sequel of ‘Under Siege’, which went on to become one of his most commercially successful films titled, ‘Under Siege 2: Dark Territory’. The next year, he also starred in ‘The Glimmer Man’ and ‘Executive Decision’.

Likewise, he made an environmentally friendly film, ‘Fire Down Below’ in 1997, where he played the role of an EPA agent fighting moguls discarding toxic waste. However, the film did not do well at the box office and his contract with Warner Bros. ended with the movie. In the year 1998, he starred in a direct-to-video film, ‘The Patriot’, which he also produced. He then appeared as himself in ‘Get Bruce’ the following year’.

Whereas, from 2001 to 2003, he was seen in the movies, ‘Exit Wounds’, ‘Ticker’, ‘Half Past Dead’, ‘The Foreigner’, ‘Out for a Kill’ and ‘Belly of the Beast’. Apart from being a martial artist and actor, he is also a keen guitarist. He released his debut album, ‘Songs from the Crystal Cave’, in 2005. The same year, the film, ‘Into the Sun’, featured a number of tracks from his album.

Since he worked as a Reserve Deputy Chief in the Jefferson Parish, he decided to capitalize on his law enforcement work and began shooting for his show, ‘Steven Seagal: Lawman’. Apart from his show, he starred in ‘The Keeper’ and ‘Driven to Kill’. In 2010, he returned to mainstream Hollywood with the movie ‘Machete’ where he played the role of ‘Rogelio Torrez’.

The same year, he also starred in ‘Sheep Impact’. Moreover, from 2011 to 2013, he appeared in ‘Born to Raise Hell’, ‘Maximum Conviction’, ‘Gunshot Straight’ and ‘Force of Execution’.

This actor has won Worst Director for On Deadly Ground (1994) at Razzie Award.

Seagal has an estimated net worth of around $16 million. But his other earnings are not disclosed.

Steven Seagal has a height of 6 feet 4 inches and he weighs is 102Kg. His hair color is black and his eyes color is dark brown. There is no other information about his body size.