Started his acting career by starring in the adventure film Sky High (2005).

Steven Strait is a married man. Steven is married to supermodel Daria Zhemkova in 2019.

Previously, he was married to actress Lynn Collins on December 23, 2007. But their love could not last long and hence, divorced in 2013. He has no kids from his both wives. 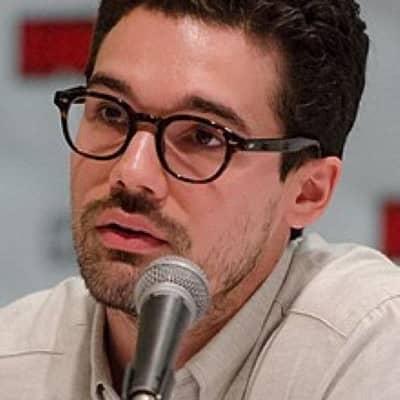 Who is Steven Strait?

Steven Strait is an American actor and singer.

Steven Strait rose to fame in his acting career by starring in the adventure film Sky High (2005). His work on the science fiction series The Expanse (2015–2022) was also noteworthy.

Moving onto his singing career, he also contributed seven songs to the Undiscovered soundtrack. He has signed to Lakeshore Records to release the album The Tribe.

He was born on March 23, 1986, in New York City and was raised there only by his parents. He belongs to mixed ethnicity, half English and half Italian descent.

Introducing his family, he is the son of mother Jean (Viscione) and father Richard Dyer Strait.

He grew up in a village in New York City, Greenwich Village with his family. On top of this, there is no information regarding his parent’s profession and sibling’s details.

It is unknown if he is the only child of the family or has brothers, sisters.

Regarding his education, he attended Village Community School at first. Then, he was enrolled at Xavier High School and took classes at the Stella Adler Studio of Acting.

During his early life, he was an enthusiast of acting and modeling. With a similar interest, he took acting lessons at the age of eleven.

While as a sixth-grader, he began to take performing classes at the Village Community School. At first, he did it for fun layer he found a passion for acting after he performed live for the first time.

To begin with his career, he first joined a modeling agency and was a model. He started modeling from his teen days and was featured in several magazines like L’uomo, Vogue, Spoon magazine, Details, Surface, Hollister Co., and Pop magazine. Moreover, he worked with photographers Bruce Weber, Herb Ritts, and Ellen von Unwerth.

Because he was working with Weber, he got featured in Weber’s 2001 book, “All-American: Short Stories.” He has worked at different acting studios, Stella Adler Acting Studio and the Black Nexxus Acting Studio in New York City from his early days.

When he was 18, he moved to California to pursue a career in acting, and in 2005 he appeared in his first film, Sky High, where he played a teenage superhero named Warren Peace. On the same film’s soundtrack, he covered The Fixx’s song “One Thing Leads to Another.”

Besides pursuing his modeling and acting career, he has also been known as a singer. To date, he has performed a few songs in the soundtrack album of Sky High (2005) and Undiscovered (2005).

Reflecting light on his riches, Steven Strait’s estimated net worth is assumed to be around $5 million to $ 8 million.

His riches are inclusive of his mansion, car, investment, and properties which he earned from his acting, modeling, and singing career. Other than this, he makes a handsome salary yet exact details in figures are missing.

He has managed to keep himself away from rumors and controversies. But there has been gossip regarding his health issues since 2013.

Steven Strait stands at a height of 6 feet and 2 inches and has an average body weight. His shoe size, bicep size, chest- waist-hip measurements are missing. He has a fair body complexion featuring his brown hair and brown eyes. Also, he puts on spectacles.

Tags : American actor and singer The Expanse The Tribe