Previously, he exchanged his vows with an Emmy winner journalist Cokie Boggs Roberts on 10 September 1966 in the garden of Steven’s family home in Bethesda.

Their wedding was attended by 1500 people. They first met each other in 1962 at Ohio State University as a part of a weeklong political conference.

This couple together has a son Lee Roberts, and a daughter Rebecca Roberts (journalist) born in 1970. Steven and Cokie have six grandchildren.

Cokie passed away on 17 September 2019 in Washington D.C. from breast cancer. 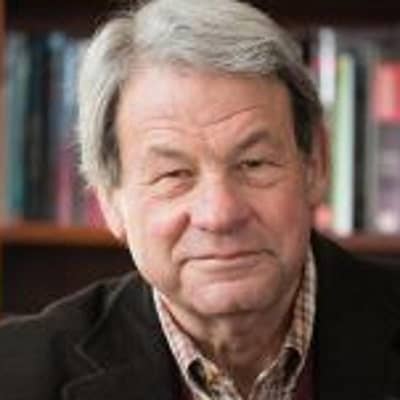 Who is Steven V. Roberts?

Steven V. Roberts is an American Journalist, political commentator, professor, and writer. He is best known for his journals and writing including President Reagan’s historic trip to Moscow in 1988.

This journalist was born on 11 February 1943, in New Jersey, the United States with a birth name Steven Victor Roberts. He belongs to English descent.

He hasn’t shared much information about his father, and mother. Steven has two brothers, twin Marc J. (deceased, twin), Glenn, and a sister Laura B.

As per academics, he attended Bayonne High School. Afterward, he graduated with a Bachelor’s degree in Government from Harvard University in 1964.

Steven V. Roberts was a very bright and intelligent student from school days. Earlier, at the time he was doing graduation at Harvard University, he worked as the editor of the student newspaper The Harvard Crimson.

After graduation, Roberts served as an assistant to James Reston in The New York Times. He worked as a senior writer at U.S. News and World Report for seven years, where he is currently serving as a contributing editor.

He worked 25 years with the Times serving as Congressional and White House correspondent, and as bureau chief in Los Angeles and Athens.

Steven has worked as a journalist for more than 50 years. This legendary journalist spent his whole life contributing to media and mass communication covering some of the important events such as thirteen presidential election campaigns, and the antiwar movement and student revolts of the 60s and 70s.

Since 1997, he is serving as the Professor of Media and Public Affairs at George Washington University. Steven and his wife Cokie has written a nationally-syndicated newspaper column that was named one of the ten most popular columns in America by Media Matters.

Afterward, this couple published a book From This Day Forward in 2000. This book was called the book “inspiring and instructive” and it spent seven weeks on the Times best-seller list in The New York Times.

My Father’s Houses was his childhood memoir published in 2005 and was featured at the National Book Festival in Washington. Afterward, in 2009, he published the story of 13 immigrant families and the new lives they’ve made in America ‘From Every End of This Earth’.

Steven V. Roberts and Cokie authored the book ‘Our Haggadah’ which was featured on many television shows like Morning Joe, Charlie Rose, and This Week. Later, Roberts published his sixth book, a history of the Washington suburbs Bethesda and Chevy Chase in 2016.

He is recently serving as the chief political analyst for the ABC radio network. This journalist also lectures widely on American politics and the role of the news media.

Steven is honored by many awards, and prizes for his lifetime contribution to journalism. Some of his honor includes

The average salary of a senior journalist in the US is $53,000. Meanwhile, according to some sources, he has an estimated net worth of $2 million as of 2022.

There is no rumor and scandal about this journalist. Meanwhile, he has managed to keep himself out of any rumor and controversy. He is doing great in her career.

Steven V. Roberts has decent height and weight. Likely, he has light hair and brown eyes.

Roberts is not active on social sites including Facebook, Twitter, and Instagram. He loves to spend quality time with his family rather than on social media.