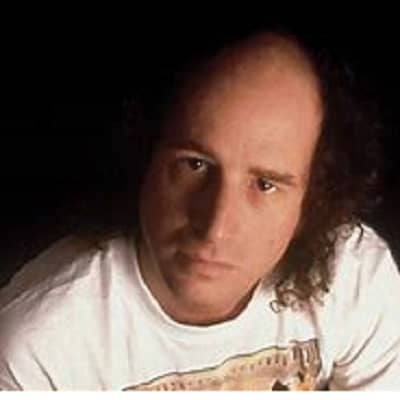 “The early bird gets the worm, but the second mouse gets the cheese.”

“The problem with the gene pool is that there is no lifeguard.”

The sooner you fall behind, the more time you’ll have to catch up.

Steven Wright got married to his girlfriend Shannon. They are blessed with two children, daughter Ella, and son Lucas.

Who is Steven Wright?

Steven Wright is also known as Steven Alexander Wright. He is an American actor, stand-up comedian, writer, and film producer.

Further, he is popular for his obviously lethargic voice, deadpan delivery of ironic, Philosophical, and nonsensical jokes, anti-humor, and one-liners with thoughtful situations.

Steven was born on December 6, 1955, in Cambridge, Massachusetts, U.S.

His father’s name is Alexander k. Wright and his mother’s name is Lucille Wright. While talking about his parents his father is an electronics technician and tested “stuff” for NASA during the Apollo spacecraft program. Later, his father worked as a truck driver.

Moreover, he was born with a mixed ethical background. Steven’s mother Lucille was of Italian descent and his father Alexander was of Scottish descent. Well, he was raised in Burlington, Massachusetts, along with his three siblings.

He has earned an associate degree from Middlesex Community College in Bedford, Massachusetts for two years.

In 1978, he started to perform stand-up comedy at the Comedy Connection in Boston.

Further, his comedy album entitled I Have a Pony was released in 1985 on Warner Bros Records. Fortunately, he received critical admiration and was nominated for the Grammy Award for Best Comedy Album.

This album reached a successful point and it landed him an HBO special in San Francisco, as a live performance, for A Steven Wright Special. His performance became the most requested comedy specials and longest-running and prompt him to succeed on another concert.

Wright has won an Academy Award for their 30-minute short film The Appointments of Dennis Jennings, written by him in 1989. He had played a role on the television sitcom Mad About You in 1992.

Similarly, he was provided voice-over work for TBS’ Disaster Area cartoon block in 1995. He wrote and directed the 30-minute short video in 1999.

Apart from that, he produced his first stand-up special titled When the Leaves Blow Away in 2006.

It was originally published on Comedy Central on October 21, 2006.

Besides being that Steven is a musician and has recorded a number of non-comedy songs.

Further, he became the first inductee to the Boston Comedy Hall of Fame in 2015.

Steven Wright and his wife Shannon were involved in a huge controversy. Steven was charged with domestic violence on December 8, 2017. Wright agreed to be part of an argument with Shannon. Not only that, he revoked the statement saying there wasn’t any physical violence.

Asides from that he was refraining for 15 games. After the case has been retired, he posted a photo of his wife on Twitter.  Still, his legal disputes didn’t end here.

Wright was again suspended for 80 games of the season due to being tested positive for human growth hormone. In contrast that he issued an allegation saying “Although I do not altercation the validity of the test, I was revolted as I have never intentionally consumed anything for performance-enhancing purposes, I have fully combined with M.L.B. and will continue to identify the source of the result.”

He has an estimated net worth of $3Million. His source of wealth is actor, comedian, and writer.

He has curly hair. He has a pair of black eyes.