Steven Yeun is a married man. He has exchanged vows with a photographer Joana Pak. The couple got married on 3 December 2016.

The couple together has a son named Jude Malcolm Yeun (b. March 2017). Their second child, a daughter was born in April 2019.

Steven and Jonak have been married for years now and their relationship is going very well. 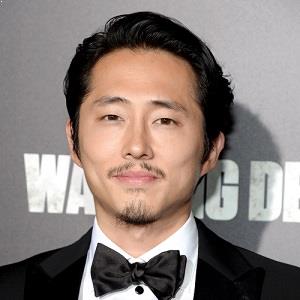 I took up boxing to get in shape for filming because it's grueling - all the running, the heat, the yelling, the crying that we do

I'm stupidly curious. I will go and touch anything until I find out that it's very harmful

I was raised in a Christian household and heard a lot of praise music, so that's what helps me get to an emotional place.

Who is Steven Yeun?

Steven Yeun is a Korean-American actor who works in movies and TV films. Steven Yeun is popular for his role as Glenn Rhee on AMC’s horror drama television series The Walking Dead (2010–2016).

He also gave his voice in Voltron: Legendary Defender and Trollhunters.

He was born on 21 December 1983, in Seoul, South Korea. His birth name is Yeun Sang-yelp. He holds dual South Korean and American nationality and belongs to the Korean ethnicity.

He is the son of Je Yeun (father) and June Yeun (mother). His father was an architect. He has a younger brother named Brian Yeun.

Steven completed his education at Kalamazoo College. From there, he received a bachelor’s degree in psychology with a concentration in neuroscience in 2005.

Steven Yeun began his career as a theater actor at The Second City in Chicago. Shortly, he joined Stir Friday Night, a sketch comedy group composed of Asian-American members.

He made his acting debut in a short film titled The Kari Files in 2009. He also had roles in several short films that year. His first acting role was as Sebastian in an episode of The Big Bang Theory (2010).

Steven Yeun got his first big break as Glenn Rhee on The Walking Dead, an AMC television horror drama based on the comic book series of the same name.

He has also acted in several other TV films including Law & Order: LA, Warehouse 13, Harder Than it Looks, The Legend of Korra, and Filthy Sexy Teen$.

This actor’s estimated net worth is $5 million. His voiced movie The Star (2017) has collected an amount of $62.8 million at the box office.

He has also invested in a restaurant named The Bun Shop at Koreatown, Los Angeles.

Rumors were that Steven will play the comics character Night wing in the new Ben Affleck Batman movie. Currently, there are no rumors of him being in any affairs.

Joana Pak is not renowned like her husband Steven Yeun. After dating for 7 years the couple decided to get married