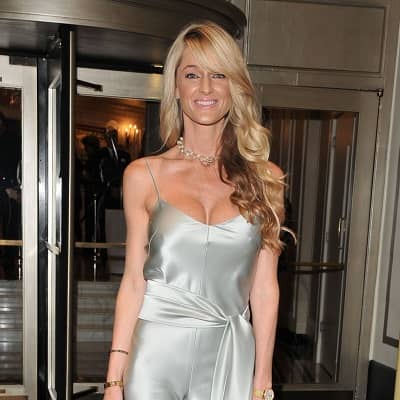 I get a lot of pleasure from being creative… in any shape or form. For me, creativity is not prejudiced and it doesn’t matter if I’m a kitchen or in front of a canvas, I just love thinking outside the box and making things beautiful.

I’ve been dreaming up and hand-crafting my own designs since I was a little girl. From clothing and homewares to gift cards and decorations… I’ve always been the type to think ‘I can make that myself’ and I so I would.

Storm Keating is a married woman. She exchanged her vows with a singer Ronan Keating on 17 August 2015 on the Scottish coast. The couple shared their pictures with Hello! magazine.

Recently, she was seen spending quality time with her daughter Coco and family.

Previously, Storm was married to Tim Ivers in 2009 August. Later, this couple got divorced in April 2012.

Who is Storm Keating?

She is best known for her work on television programs like ‘The X Factor‘, ‘The Voice Australia‘,’ Masterchef Australia‘, and ‘The Voice UK’.

This fashion designer was born in 1981, October, 21, in Queensland, Australia with the birth name Sharyn Storm Uechtritz.

Her father‘s name is  Gordon Charles Uechtritz and her mother‘s name is Debra Lynn according to her birth certificate. But, Storm’s official website listed her mother’s name as Sharni Raharni.

She has three brothers named Wayne Gordon, Graeme Murray, and Peter John. Sharyn grew up in a from Papua New Guinea.

She belongs to English, German, Danish, and Samoan descent.

Earlier, during her time at the university, Storm Keating completed an internship in the Original Programming Department at HBO.

Keating began her career in television production at Channel Nine in Sydney. She worked on the production of the Australian version of NBC’s ‘The Apprentice’ in 2009.

From 2010 to 2012, Storm worked with popular formats like So You Think You Can Dance, The X Factor, ‘Masterchef Australia’, and The Voice.

Afterward, she moved to London, where she became the producer and director of popular reality show ‘The Voice UK’ in 2012.

From the age of nine, she has been sewing and creating her own designs. Storm started her fashion designing career in 2011.

Afterward, she has also collaborated with Legendary Italian bootmaker, Stivaleria Cavallin. The products ‘Storm Boots’ were launched in 2015 February at the London Fashion Week.

The same year, she was announced as an Ambassador for Positive Luxury for a London-based company that awards luxury brands with Trust Mark for meeting sustainability and ethical business criteria.

Later, in 2016, Keating launched her fashion and lifestyle blog.

The salary of a fashion designer in Australia is estimated to be $62,000. Meanwhile, according to some sources she has an estimated net worth of $5 million.

There was a rumor that Keating has admitted that she would have given up the chance of becoming a mother for her husband Ronan.

Moreover, there are no controversies circulating around her and she is doing great in her career.