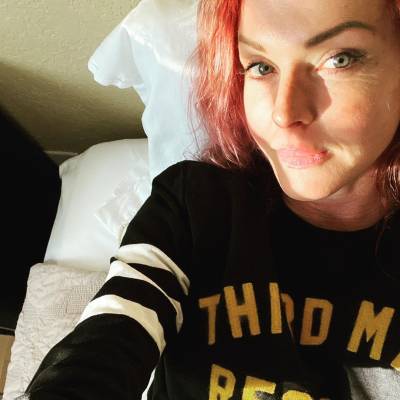 Talking about her sexuality, Storm Large has openly mentioned she is bisexual. However, Large mentioned that she does not like the term and instead calls herself “sexually omnivorous”.

Storm is in a love relationship with Stephen Cassell. Stephen is a marketing personnel as well as LGBT Jewish activist. Large has not revealed their exact details of love life. However, she often shares photos along with Stephen on her Instagram handles.

It seems that Storm is unexpressive toward the public about her personal life.

Who is Storm Large?

Storm Large was born on 25 June 1969. At present, her age is 51 years old. Likewise, her birthplace is Southborough, Massachusetts, the USA. Presently, she resides in Portland, Oregon.

Storm is the daughter of her father, Henry Large whereas her mother’s details are still not known to the public. Moreover, she has not revealed her siblings’ details in the public as of now.

Talking about her nationality, Large holds an American identity whereas her ethnicity is Caucasian.

The star took her graduation degree from St Mark’s School in the year 1987. Her dad was a history teacher and the football team coach too.

After completion of her higher education, Large joined the American Academy of Dramatic Arts in New York. Nevertheless, she had decided to quit the music journey but was motivated by her friends and thus started singing with a band named “The Balls”.

Initially, Storm Large created the band named, Flower SF. She performed alongside Michael Cavaseno and was recognized as the duo Storm and Michael. Later she starred Shaunna Hall of 4 Non Blondes and P-Funk known as a rhythm guitarist.

Talking about her band, The Balls also famed as Storm and the Balls were created in May 2002 as she shifted to Portland. The band performs Lounge-core, mashup renditions of artists like ABBA, Black Sabbath, Cheap Trick, Billy Idol, Led Zeppelin, Motorhead, and Olivia Newton-John.

Further, Storm also emerged in the San Francisco Bay Area with her past bands Storm Inc, Storm and Her Dirty Mouth, and FlowerSF. Large is well-recognized for being a participant on Rock Star: Supernova. She got elimination on 6 September 2006. Post her elimination from the show, host Dave Navarro recorded a guitar track for her single “Ladylike”.

Large performed The Star-Spangled Banner on the second season finale of ESPN reality television show The Contender. Afterward, she sang the national anthem on 4 November 2006 at the Portland Trail Blazers’ opening home game of their 2006-07 NBA season.

Additionally, Storm also emerged being a guest on The Ellen DeGeneres Show on September 11, 2006.

Popular actress, as well as singer, Large, has earned handsome money from her career. She has been active in her profession from 1989 till now. From her profession, she is currently living a lavish lifestyle.

It is reported that Storm Large has an estimated net worth of $1 million.

Multi-talented artist, Large has never been part of any controversial matter or rumors till now. She has maintained a balance between her personal and professional life.

It seems that the named favors enjoying her personal life and does not want to merge it with her professional life.

51years old star, Storm Large is highly famed known for her hot figures and shapes. The storm has gorgeous looks as well as a charming personality.

She stands at a height of 6 feet. Also, she has a balanced body weight of 57 kg.

Furthermore, Large has green eyes whereas her hair is blonde. The actress often dyes her hair

About her social media presence, Storm Large is an active personality on social media. The storm has more than 27.5k followers on her official Instagram account @stormof69.

She is also active on Twitter with around $17.8k followers.

Moreover, Large is also available on Facebook with nearly 41k fans and supporters.