Stromae is a musician, singer, rapper, and songwriter who sang a hit song titled "Alors on danse". 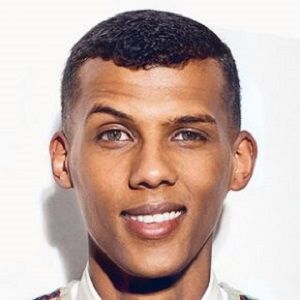 I'm not making music for old people or young people. [It's] for everybody that wants to listen to it

I think it's important to be sincere. And I could be the most sincere just staying in [my] mother language actually. And that's the reason why I stay composing and writing in French

I prefer consider Stromae as a collective project. Stromae is not me. Or at least it is not only me.

What is the relationship of Stromae?

Stromae is secretly married to Coralie Barbier. The pair married in a private ceremony held in Mechelen.

He began dating former Miss Belgium Tatiana Silva in 2011. The couple dated each other for over a year. After a year-long affair, the couple broke up in September 2012.

Stromae is a Belgian musician, singer, rapper, and songwriter. He rose to public attention in 2009 with his song “Alors on dance“, which became number one in several European countries.

In 2014 he won an “Artiste masculin Francophone Award” at the NRJ Music Awards. His real name is Paul Van Haver.

Stromae was born on 12 March 1985, in Etterbeek, Brussels, Belgium. His nationality is Belgian and he is of Rwandan and Flemish ethnicity.

Stromae was born Paul Van Haver. He is the son of Miranda Marie Van Haver and Pierre Rutare. His father was an architect who was killed during the 1994 Rwandan Genocide. His mother raised him and his four siblings in a French community in Brussels.

While he was in school, he formed a small rap group with his friends. He was interested in music from an early age and he fulfilled his dream of becoming a professional singer and musician.

Stromae was involved in music at a very young age while he was still in school. In 2001, he appeared in public as a rapper called Opmaestro, though he later changed his stage name to “Stromae”.

At the age of 18, he founded a rap group called “Suspicion” along with rapper “J.E.D.I.” in 2007, he decided to concentrate fully on his musical career.

In 2008 he signed a 4-year record deal with “Because of Music” and “Kilomaître“. In 2008, Stromae worked as a young trainee at the music radio station NRJ in Brussels. He rose to fame in 2009 with his song “Alors on dance“.

His song became number one in several European countries. In 2010, he was nominated for “Best Dutch and Belgian Act at the MTV Europe Music Awards”.

His first single “Papaoutai” from his second album Racine carrée was released on 13 May 2013. His single went on to chart number one in Belgium and France, and number two in the Netherlands.

He released his second studio album Racine carrée on 16 August 2013. In June 2014, he made his US television debut on NBC’s Late Night with Seth Meyers.

Stromae: Salary and Net Worth

She has accumulated a net worth of $5 million. But there is no information regarding her salary.

Stromae has a height of 6 feet 3 inches. His bodyweight is 78kg. He has dark brown hair and hazel brown eyes.

Besides these, his chest size is 37 inches, his waist size is 30 inches and his Biceps size is 12 inches.

Also get to know more about the birth facts, education, career, net worth, rumors, height, and social media of different personalities like Andrew Wyatt, Larry Hernandez, and Mandy Moore.