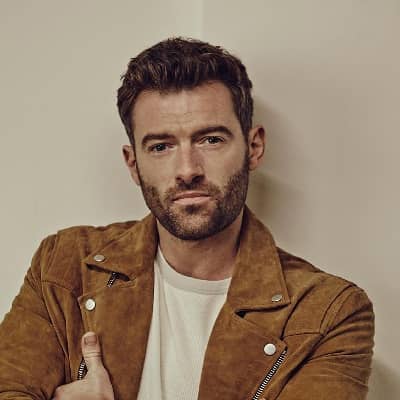 Stuart Martin was married to his longtime girlfriend Lisa McGrillis on July 26, 2015. They got married after some years of a romantic relationship. The couplet met at a Christmas party in the National Theatre bar.

They have one beautiful son. They are living happily with each for many years and there is no sign of any split up and separation.

Who is Stuart Martin?

Stuart Martin is a Scottish actor known for his roles in Babylon, Jamestown, and Medici: Masters of Florence. Furthermore, he is also the spouse of British Actress, Lisa McGrillis.

He was born and raised in Ayr, Scotland but there is not much information about his parents. Stuart has also not revealed anything about his siblings if any.

He is of Scottish and British nationality and of Scottish ethnicity. Talking about his education, he studied drama at the Royal Conservatoire of Scotland.

After the completion of his studies, he started his acting career from a television program. His play was Jamie Revie in the detective fiction tv program, Taggart.

However, his career in big screen flying starts with his debut film Army of Thieves in 2020. He has done a wide range of tv series including Babylon, Crossing Lines, Silent Witness, Medici: Masters of Florence, Jamestown, and Miss Scarlet and The Duke. He has also done a big-budget film, Army of Thieves. Recently, his recent notable mention is Dampyr (2021).

Stuart has earned a hefty amount from his profession. Likewise, he has an estimated net worth of around $1 million.

This hardworking actor has never been the subject of any rumors or controversies.