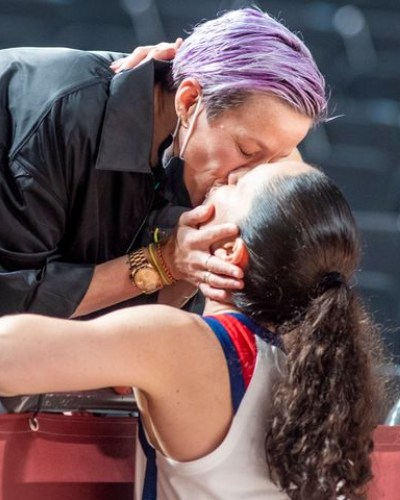 Sue Bird and fiancee Megan Rapinoe celebrated the Olympic Gold with kisses. Sue Bird made history by winning her fifth Olympic gold medal. After winning the gold medal on NBC Sports Washington, she ran to her fiance Megan. The pair hugged and kissed each other as a celebration.

Megan had won a bronze medal just a few days and stand cheering for Bird as the USA women’s basketball team and won its seventh consecutive gold medal. Megan said,

“[I’m] honestly inspired, and I told her the other day, it feels like corny to say but it’s like everything you would want in someone that you would look up to. Obviously, I get to be with her and I love her, that’s the most special part.”

“She just does things the right way. She plays with a sense of joy, she makes everyone else around her better on and off the court. She’s just an amazing person, I’m gonna start tearing up. You’re gonna make me cry on national TV.”

Relationship of Megan Rapinoe and Sue

On 2nd July 2021, Megan Rapinoe came out to the world as gay. In July 2016, Megan slid into the DMs of Sue. After that, they started talking and started hanging in Seattle. During an interview with ESPN, Bird came out publicly and revealed that she has been dating Megan since the fall of 2016.

Megan and Sue are going very strong when it comes to their relationship. They are on each other’s side at every moment and do not shy to flaunt their love for the world. They are an inspirational couple. The couple got engaged in October 2020.

Also read Why did Megan Rapinoe said ‘Gross Men like Trump’ is the reason women go gay? Know about her sexuality, girlfriend, family, and net worth

Suzanne Brigit Bird is a popular American professional woman basketball player. Currently, she plays for the USA Women’s National Basketball Team and Seattle Storm of WNBA. She is a three-time WNBA champion and an Olympic gold medalist. Read more bio…