Suki Waterhouse is an English actress, model, and entrepreneur. 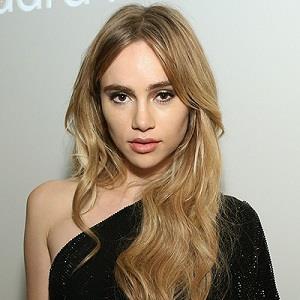 I can stay in the bath for, well, the longest has been seven or eight hours. I get completely set up with my laptop so I can watch 'The Sopranos,' put out some scented candles, music. I have a towel nearby so I can dry my hand to change the music or the TV. I make a little heaven for myself. And then I just refill and refill.

What is the relationship of Suki Waterhouse?

Suki Waterhouse dated English Musician Miles Kane from 2012 to March 2013. Later, she was involved in a relationship with American actor Bradley Cooper from February 2013 to April 2015. At present, Suki is believed to be in a relationship with Mexican Actor Diego Luna.  However, they have not been seen together for over a month now.

Who is Suki Waterhouse?

Suki Waterhouse is an English actress, model, and entrepreneur. She is the co-founder of the youth brand of accessories Pop & Suki. Additionally, she has appeared in ‘Assassination Nation, ‘The Girl Who Invented Kissing’ and ‘The White Princess’ among others.

Waterhouse was born as Alice Suki Waterhouse in Hammersmith, London on January 5, 1992, to parents Elizabeth, a cancer care nurse, and Norman Waterhouse, a plastic surgeon. She is 29 years old. Throughout her childhood years, she grew up in Chiswick, London.

Additionally, she has a brother named Charlie, and two younger sisters Madeleine and Imogen. She became interested in the world of acting in her childhood years. She is of British nationality. Furthermore, she belongs to an English ethnic background.

Waterhouse initially began her modeling career after being discovered in a pub in London when she was 16.  Additionally, when she was 19, her first noted campaign was a lingerie model for Marks and Spencer. She is the face of Burberry and Redken, In addition, she has also modeled for brands like Tommy Hilfiger, Swatch, H&M, Alice + Olivia, Coast, Max Studio, Sass & bide Caterina Gatta, and Pepe Jeans.

She has appeared on the cover of British, Korean, Thai, Taiwanese, and Turkish Vogue. Apart from her modeling career, she is also a successful actress. She has over 15 credits as an actress.

Waterhouse has appeared in movies and television series including ‘Assassination Nation’, ‘Material Girl’, ‘Pusher’, ‘Love, Rosie’, ‘Insurgent’, ‘Pride and Prejudice and Zombies’ and ‘Absolutely Fabulous: The Movie’ among others. Additionally, she also has one credit as a producer.

Waterhouse garnered the Festival Award nomination at the Golden Door International Film Festival of Jersey City in 2017. She received the nomination in the category of Best Actress in ‘The Girl Who Invented Kissing.

Waterhouse has not revealed her current salary. However, she has an estimated net worth of around $ 10 million at present.

There are rumors that Waterhouse has dated James Marsden, Nat Wolff, and Richard Madden. Additionally, at present, she is not involved in any notable controversies.

In addition, she has over 1M followers on Instagram. Similarly, her Facebook page has more than 87k followers.

Bradley Cooper Briefly Dated Dianna Agron But It was not Serious!