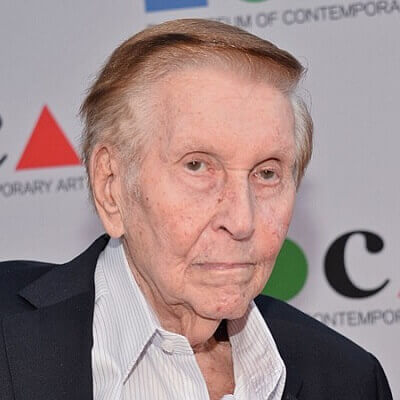 As of 2020, Sumner is single. He is very old and isn’t much active in regards to his dating life or even professional life at the moment.

Sumner has been married twice in his life. His first marriage was with Phyllis Gloria Raphael, with whom he was married for 55 years. Sumner and Phyllis married on 6th July 1947 until their official divorce on the 26th of July, 2002. The couple has 2 children together, Brent and Sumner Redstone. Sumner married again on the 6th of April 2003 with Paula Fortunato, a former primary school teacher. Their marriage didn’t last long, however, and they were officially divorced on January 22, 2009.

Aside from that he also had a girlfriend, Sydney Holland whom he dated from 2010 to 2015. They lived together as well but weren’t married. He also had another live-in girlfriend until 2015, Manuela Herzer, who took care of him as well.

Who is Sumner Redstone?

Sumner Redstone is a very successful and influential American businessman. Currently, he is the majority owner and chairman of the board of the National Amusements theater chain. National Amusements is the parent company to CBS Corporation and Viacom and Viacom in turn is the parent company of Viacom Media Networks, BET Networks, and Paramount Pictures.

Sumner Redstone was born on the 27th of May, 1923 in Boston, Massachusetts, the U.S. He recently celebrated his 97th birthday in 2020. Redstone was born to Jewish parents Belle Ostrovsky (mother) and Michael Rothstein (father).

He was raised alongside his brother Edward Redstone in Massachusetts. His ethnicity is Ashkenazi Jewish.

Redstone was very bright as he was always top of the grade in high school and graduated first in his class from Boston High School. He then attended Harvard for further education and graduated from there with a bachelor’s degree.

Later he served the military in the 2nd world war as a First Lieutenant. After this, he continued with his education and attended Georgetown University Law Center. He later transferred to Harvard Law School from where he received his law degree in 1947.

Summer Redstone joined the theater chain National Amusements, which was owned by his father in 1954. He steadily climbed its ranks and became its CEO in 1967. He believed that content would be superior to the content distribution mechanisms and as such he invested in acquiring several big content creating companies. In the beginning, Sumner set his sights on acquiring Viacom, which owned several popular channels such as Nickelodeon, MTV, and several other showtime networks. After a four-month hostile takeover in 1987, Redstone won the voting control of Viacom and under his management made it into the media giant that it is today.

After Viacom, Redstone set his sights on Paramount Pictures and after a bidding war with fellow businessmen, Barry Diller and John Malone acquired Paramount Pictures for a high price. Under Redstone’s new leadership Paramount Pictures went on a ten-year winning streak producing global hits such as Titanic, Saving Private Ryan, Forrest Gump, and the incredibly successful Mission Impossible franchise in the process. Redstone also acquired Blockbuster and merged it with paramount Pictures.

Sumner also acquired CBS after the then president of CBS suggested a merger to Redstone. The merger happened on favorable terms for both parties and after its completion in 2000, Viacom had one of the most diverse businesses that can be imagined. Viacom owned broadcast networks, cable TV networks, pay Television, Radio, and Television production all at once.

Redstone’s managerial prowess and ambition have been crucial in the creation of his current media empire of nearly 40 billion U.S. dollars. Currently, he is the majority owner and chairman of the board of National Amusements. He was formerly the executive chairman of CBS and Viacom as well but had to resign from both roles after his health complications in 2016. He has donated millions to several philanthropic causes and has written an autobiography as well.

As of July 2020, Sumner has a massive net worth of $2.9 billion. He accumulated all of this from his massive media empire. He is currently ranked at no 804 in the Forbes: Billionaires 2020 list.

His total compensation from Viacom in 2014 was a staggering 13 million dollars. But since then due to his declining health, age, and subsequent inactivity, his current income is much lower.

Due to his massive fortune, there have been many who have tried to keep it for themselves. The most notorious of those who wanted the fortune for themselves were his ex-girlfriends, Sydney Holland and Manuela Herzer. They both manipulated the aging Redstone and even made him estranged from his daughter Shari for a while, all so that they could be the ones who inherited his will. Several nurses and maids in Sumner’s estate have stated that Manuela and Sydney actively manipulated Sumner and almost led to him manipulating all ties with his family. They both did this so that they could be the inheritors of his massive fortune.

The two were not successful in their plans though and things fell apart in 2015 for both of them. It all happened when Sydney’s relationship with another partner, Pilgrim, came to light. Sumner subsequently found out about this and in two days she was out of the estate. Sumner was very sad about this as it was evident that he cared about her but nevertheless, he had her written out of his will. Manuela also tried her hardest to be included in Sumner’s will which would mean that she would get 50 million dollars upon his death. She intercepted letters, didn’t allow Sumner to see other women, and kept Sydney and Sumner’s daughter Shari as far from Sumner as she could. This all proved to be meaningless when she was kicked out of Sumner’s mansion in the fall of 2015. Sumner also removed her from his will.

Manuela immediately took legal actions and the legal battle between her and the Redstone family concluded four years later in 2019. In the end though, the settlement reached by the courts was in favor of the Redstone family. As per the agreement Manuela has to pay back 3.25 million in gifts and rewards are given to her by Sumner. She is also not part of his will and most of his assets will be transferred to his children and grandchildren upon his death. Sumner’s relationship with his family returned to normal after 2015 and as of now, Shari Redstone; Sumner’s Daughter, is the heir to his massive media empire.

Sumner stands at a height of 6 feet and weighs approximately 80 kilograms. His hair color is blond and her eyes are blue in color.

You may also like to read more about the Bio, Career, Relationships, and more about Nikita Kahn, Marc Jacobs, Nicole Lapin, and more.