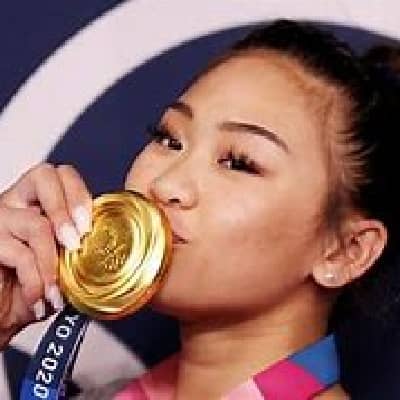 Heading towards her relationship status, she is possibly single. As of now, she is more focusing on her career and hence low-key about her romantic life.

Who is Sunisa “Suni” Lee?

Sunisa “Suni” Lee is an American artistic gymnast. Further, she is famous after being the first Hmong American Gymnast to compete in the Olympics.

In addition, she is the 2020 Olympic all-around champion and uneven bars bronze medalist.

She was born on March 9, 2003, in Saint Paul, Minnesota. This 18-years-old girl holds an American nationality and belongs to the Hmong ethnic (Mixed) background.

Focusing on her parent’s information, her mother’s name is Yeev Thoj and her father’s name is John Lee. Her mother is a healthcare worker and she is a refugee, immigrated to the United States as a child.

Furthermore, she has five siblings, Evionn, Lucky, Noah, Jonah, and Sheyenne.  While Evionn is also a gymnast.

This gymnast girl completed her schooling at South Saint Paul Secondary School. At present, she is studying at Auburn University on a gymnastic scholarship after signing her National Letter of Intent with the University in September 2020.

In her early days, she started learning gymnastics and later decided to pursue it as her career.  In 2015, she began her career in gymnastics by competing in the Hopes division. Likewise, she made her junior elite debut in 2016.

Likewise, she made her International debut in 2017 at the Gymnix International Junior Cup, where she took silver on uneven bars. She has played for the US team in 2018 also at the Pacific Rim Gymnastics Championships where she earned the gold medal in the team final with the team. This girl won the bronze medal in the all-around behind Wong and Dicello at the 2018 US National Championships.

In August 2019, she competed at the American Classic where she placed second on beam and fifth on bars. Later, she gained recognition after being a member of the gold-winning team in the 2019 World Championships.

Besides that, she placed first on bars and third on the beam behind Skye Blakely and Jordan Chiles.

Suni Lee has an estimated net worth of $2Million. Her source of income is a Gymnastics career.

She is a gorgeous lady with a well-maintained athletic body and has a decent height of 5 feet. Her body weight is around 50 Kg.

Moreover, she has a fair complexion with pair of black eyes and black hair.

This Olympic gold medalist is pretty active on Instagram so she has garnered 1.4M followers and has 146.3K followers on Twitter.