Sunlen Serfaty is a CNN congressional correspondent. Sunlen is married to her husband and together the couple has one daughter. 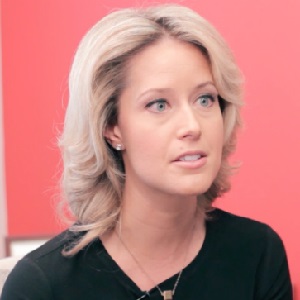 Sunlen Serfaty is a married woman. She is married to her long-time boyfriend Alexis Leigh Serfaty in 2013. The couple first met in 2006, at the Rose Park in Georgetown.

Their marriage ceremony was held in the place where they first met each other. Her husband is a policy adviser at the Office of the Secretary of the United States Department of Transportation. The couple has been married for four years now and their relationship is still going very well.

Also, recently in May 2017, they welcomed a baby girl whom they named Roosevelt Jolie Serfaty.

Who is Sunlen Serfaty?

Sunlen Serfaty is an American journalist. She is best known as a national correspondent for CNN based in Washington.

She has previously worked as an associate producer of television and radio projects for the Washington Post. She extensively covered the 2016 presidential election and has reported from all across the country following the GOP nominees during the Republican primary contest.

Sunlen Serfaty was born and raised in Richmond, Virginia, USA. She is an American by nationality and she is of North American ethnicity.

Her birth name is Sunlen Mari Miller. There is no exact information about her birth date. Her father’s name is William N. Miller and mother’s name is Denise M. Miller.

Her mother works as a marketing communications manager in Richmond, Va. whereas her father is an independent commercial arbitrator and mediator.

After graduation, Sunlen began her journalism career working as a local general assignment reporter in a local press. After that, she began working as a reporter for ABC News. Previously, she has worked as an associate producer of television and radio for The Washington Post from May 2003 to September 2004.

After joining ABC News, she covered President Obama’s 2008 presidential campaign. After that, she joined CNN as their Washington-based correspondent. She covered the 2016 presidential election. She has also reported from all across the country following the GOP nominees during the Republican primary contest.

Her net worth is $2 Million according to the sources. Whereas her salary is estimated to be around $126 thousand.

Also know more about the early life, career, net worth, relationships, and controversies of other journalists like McKinzie Roth, Axelle Francine, Jonathan Swan, and Betsy Woodruff.

CNN congressional correspondent Sunlen Serfaty is in motherhood. She and her husband are blessed with a baby girl! Details on their relationship included!!