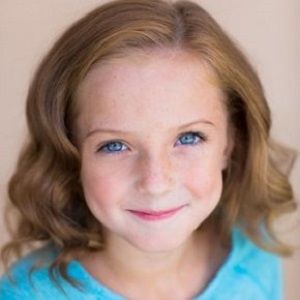 Sunnie Pelant is an American child TV actress and dancer. She is best known for her role as Christine Booth on the American crime procedural drama television series, Bones (2014-present). She also appeared in an episode of Ladies Like Us in 2014.

Sunnie Pelant was born on November 9, 2009, in San Diego, California, United States. Her nationality is American and she is of North American ethnicity.

There is no information about her parents. She has three older siblings; two brothers and a sister. She was interested in acting since her early childhood age. Besides acting, she is also a dancer. She is currently training in contemporary, jazz, and tap dance.

Sunnie started acting in commercials at an early age of three. She made her acting debut appearing in a spot for Huggies. She rose to fame when she was cast for the role of Christine Booth on the American crime procedural drama television series, Bones in 2014.

She portrays the character of Christine Booth in the series since 2014 and has appeared in 26 episodes till now. She also appeared in an episode of Ladies Like Us in 2014. Besides acting, she is a competitive dancer. She likes contemporary, jazz, and tap dance. Despite her young age, she has been a famous personality in the industry.

Sunnie Pelant:  Salary and Net Worth

Her net worth and salary undisclosed as she is just a child of age seven.

Sunnie Pelant has the height of 3 feet 5 inches. Her body weighs 14kg. She has brown hair and blue eyes.