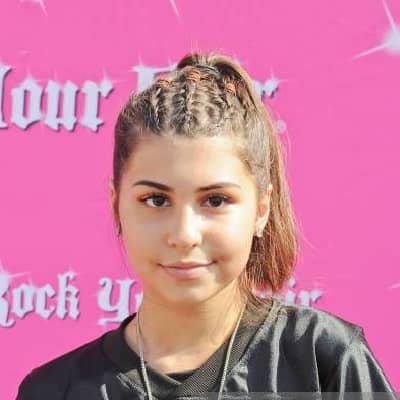 My goal is to leave a positive mark on the world and to be a positive influence for other kid. I want them to remember that if you work hard, stay loyal and remain humble, then your dreams will come true.

What is the relationship of Sunny Malouf?

She hasn’t said anything regarding her love affairs and has also not seen dating anyone.

But there was news that she dated Taurin Almas. Yet the exact news is unknown.

Who is Sunny Malouf?

She rose to fame after the release of her music such as One Minute, Yellow Brick Road, Lean, and Bad For Me.

Sunny was born on March 02, 2004, in Dallas, Texas, United States. Her full name is Sunny Nicole Malouf. She has Lebanese and Hispanic ancestry.

Her father, Richard Malouf is one of the world’s richest dentists. He is the founder of the All Smiles Dental Clinics. Likely her mother is Liliann Malouf. She has two older brothers Gavin Malouf and Richie Malouf.

Sunny completed her schooling in Dallas. Ans she might be studying high school or college now.

Sunny started performing in her early childhood. She released her first track ‘Lightning in a Bottle’ in September 2015 with an American rapper Silentó. The single ranked up the music charts within days of its release.

Sunny then gain popularity in the music field. She also performed on the Digitour. And in 2017, she released her first album. Likely her song, One Minute has more than 1M views.

Furthermore,  Sunny is also a member of the web group Team 10 founded by a famous YouTuber, Jake Paul. Sunny even went on Tour to 11 different cities in the United States with her Team 10 members.

The group went on a tour and travel to various places including Atlanta, Boston, New York, Detroit, Toronto, and Rosemont in May 2018. And they ended their tour on June 24, 2018, at the capital of St. Paul in Minnesota.

Sunny launched her self-titled YouTube channel on September 11, 2014. She uploads dancing videos, dynamic live music performances, cover songs, and some other types of videos on her channel. As of Dec 2020, she has 96K subscribers and has a total of 2,818,911 views.

The star has built her career at a young and is still improving on it. She hasn’t been part of any such rumors and controversial acts in the media.

Furthermore, Sunny’s father Richard is one of the richest dentists in the world. His net worth is around $1 billion. And he owns various properties along with two private jets and expensive cars.

Their house of Texas was under sale worth $32M in 2016. The house that stands at 37,000 Sq. ft with 1 tennis court, an indoor basketball court, eight bedrooms, 18 bathrooms, and also a private waterpark.

Similarly, she has a beautiful face with dark brown hair and eyes. Yet she prefers to wear different pairs of lenses.

Likely, her official Tik Tok account also holds over 1M fans with 20M likes. Similarly, she has her own YouTube channel with 96K subscribers.