Sunny Suljic is a well-recognized child actor and skateboard player. 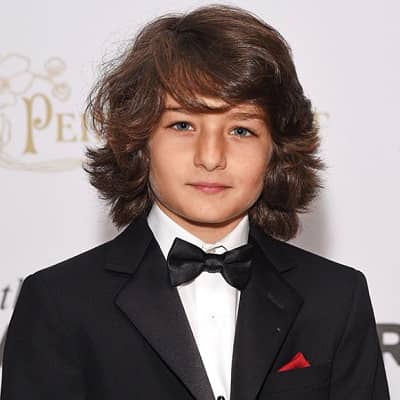 Talking about his love life, Sunny Suljic is presently single and he is not dating anyone at present. He is residing in Los Angeles, California along with his parents. Moreover, he is too young to involve in any kind of relationship at present.

It seems that he has focused on building his career. Also, he hardly shares any of his relationship details in the public.

Who is Sunny Suljic?

Suljic is widely famed for his role as Bob in Yorgos Lanthimos’s 2016 drama, The Killing of a Sacred Deer and as the voice and motion capture actor for Atreus, the son of Kratos in the 2018 video game, God of war.

Moreover, he has been nominated for the BAFTA Award for Best Performance in a Video Game.

Sunny Suljic was born on 10 August 2005. At present, his age is 15 years old. Likewise, his birthplace is Roswell, Georgia, the USA.

Not much known about his father and mother’s details, Sunny has been secretive towards his family details. Moreover, he has not shared his sibling’s details as well to the public till the present.

Talking about his nationality, Suljic holds an American identity whereas his ethnicity is mixed(Bosnian-Russian).

Regarding education, the actor has not disclosed his educational details. He might be completing his education at a local private school in Los Angeles. Moreover, he started learning skateboard from his early days and is a professional skateboard player.

A talented young star, Sunny started his acting debut at the early age of 8 years old. He featured in the role of Jody Dunlap in his prime short movie, Ruined in the year 2013. A year later, Suljic was seen in the first episode of the TV show, Criminal Minds. There, he portrayed the role of Young Joe Bachner.

Additionally, Sunny has emerged in many Hollywood movies. He is a professional skateboard player as well. The talented actor owns a YouTube where he posts his skateboarding videos. He started skateboarding at the age of five years old.

Going on, Sunny emerged in his first short Hollywood movie, Ruined. Afterward, he portrayed the role of Gabriel in the movie, 1915. The actor appeared in his first leading role-playing the role of Bob Murphy in the movie, The Killing of a Sacred Deer. He also achieved high admiration after emerging in the blockbuster movie, Mid90s. The movie also featured some renowned stars such as Katherine Waterston, Lucas Hedges, and so on.

Suljic has emerged in some other well-renowned movies such as The Unspoken, Shady Neighbors, The House with a Clock in Its Walls, and so on.

Some of his remarkable movie appearances are The Unspoken, Don’t Worry, He Won’t Get Far on Foot, Mid90s, The House with a Clock in Its Walls, and The Chrismas Chronicles 2.

He is active in his profession from the year 2013 till the present. He has performed in the 2018 American fantasy comedy film, The House with a Clock in Its Walls that earned $131.5 million on the box office.

It is reported that Sunny Suljic has an estimated net worth of $500 thousand. Similarly, he has been nominated for a BAFTA Awards for best performance in Video Game for the God of War 4.

Sunny has never been part of any controversial matter or rumors till now. Suljic is preoccupied with his personal and professional life.

It seems that the actor prefers enjoying his personal life and does not want to merge it with his professional life.

15 years old young star, Sunny Suljic has a chocolaty face, a cute smile, and an admirable personality. He stands at a height of 5 feet 3 inches. Also, he has a balanced bodyweight of 60 kg.

Furthermore, Suljic has blue eyes whereas his hair is light brown. He wears a shoe size of 6 (US).

Nevertheless, the young actor has never mentioned other physical details in the public yet.

Regarding his social media presence, Sunny Suljic is an active personality on social media. Sunny has more than 592k followers on his official Instagram account @sunnysuljic.

He is also active on Twitter with around 5.5k followers. He also owns a YouTube channel named Sunny suljic and has nearly 3.27k subscribers.

However, Suljic is not available on Facebook at the moment.