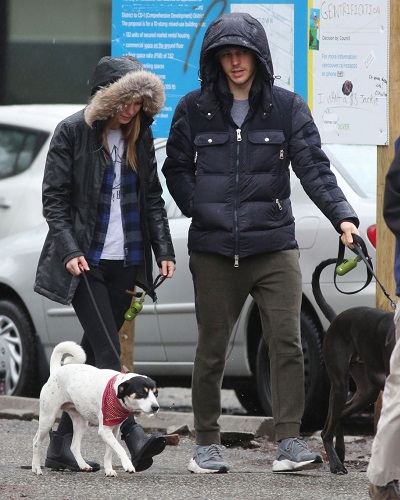 On 10 February 2019, Melissa took to Instagram to share with her fans that she has got engaged. She displayed her massive, glittering engagement ring and captioned the picture:

“Yes yes yes it will always be yes,”

Chris Wood at the same time was kissing her on the cheek. Chris uploaded the same picture on his Instagram and wrote below it:

Chris uploaded a few more pictures of themselves. He posted a snapshot of him and Melissa attending a wedding together.

It was actually a throwback picture and the pair was grinning at the camera and behind them were the yellow fall leaves.

“Not from our wedding BUT IT WILL BE SOON,”

The relationship timeline of Melissa Benoist and Chris Wood

Chris and Melissa played lovers in the CW show Supergirl in 2016. They played the characters Mon-El and Kara Danvers respectively.

They met on this show and later after Melissa got her divorce from Blake Jenner, Chris, 30, and Melissa, 30 began dating.

Melissa and Blake divorced in December 2016. She was married to Blake in 2013 but certain differences led to them separating and filing for divorce.

People came to know about their relationship when they were spotted kissing each other on a beach in Cancun, Mexico in March 2017.

An eyewitness told E! Online at that time:

“They kissed passionately several times and appeared to be in their own world,”

“They didn’t appear to care who watched their passionate embraces.”

Melissa was wearing a giant engagement ring and Jen Meyer has designed the ring. The price of the ring is not known but it does seem expensive.

Melissa Benoist and her career and life

Melissa is from Colorado and her father is a physician. Her Parents divorced when she was young. Her father remarried. She has two biological sisters namely Jessica and Kristina. But she has five half-siblings from her father’s side.

Melissa, unlike her two sisters, was fond of the entertainment field. She started to learn dancing at age 3 and mastered tap, jazz, and ballet. At age 4, she started acting in community plays.

She began to partake in theater plays and also gained media attention. After her school graduation, she migrated to New York. In 2011, she obtained a BA in Theater Arts, Along with her studies, she was also acting in several stage plays.

Her actual career started in 2008 with singer Mariah Carey in Tennessee. She later bagged the role in Glee and also got endorsements and commercials to do. Other major roles came her way and now she stars in Supergirl.

Colorado-born Melissa Benoist was born on October 4, 1988. She possesses American nationality. Multi-talented Melissa is an actress and a singer.

Melissa Benoist is well-known among the media and the public because of her character in “Supergirl”. It is an American superhero action-adventure drama television series where she plays the character of Kara Zor-El/Kara Danvers/Supergirl.

Additionally, she gained fame for her role in the TV series, “Glee”, and an Oscar-nominated film, “Whiplash”. More Bio…