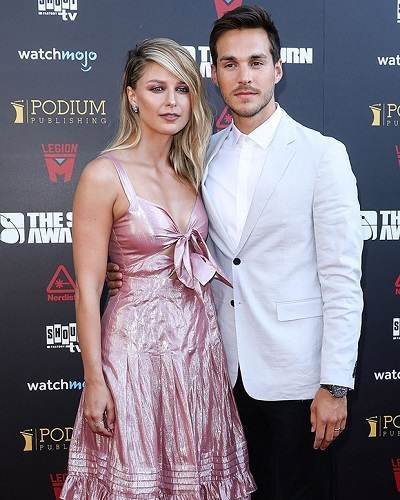 Melissa Benoist is pregnant! The supergirl star is expecting her first child together with her husband Chris Wood. The couple is soon to experience their first parenthood together. They confirmed the news of their upcoming bundle of joy through their official social media.

The Supergirl actress will soon welcome her first child with her husband Chris Wood. They shared the news of their first child through their official Instagram account. The 31-year-old actress posted a picture of her where she was holding a baby size blue jumper on her hand with the big smile on her face. Her husband was on the side holding their pet dog. On the caption she wrote:

“A non-canine child is coming to our family very soon”

On the post, she also joked that her husband Chris was always old das with his nature. And she also mentioned he is going to be a dad for real now. Chris also shared a picture of her and Chris while she was holding him back and he had stuffed belly like a pregnant woman. He confirmed the news through the caption saying though the picture is a joke the news is real.

Relationship of Melissa and Chris

Six months back, Melissa tied the knot with her fiance Chris on a private ceremony held at an estate in Ojai, California. They read vows on the appearance on celeb guests like Kevin Smith, Odette Annable, and Paul Wesley. The couple took the next step in their life in a beautiful ceremony. Some of the insiders also described the event as a beautiful setting which was peaceful and quiet. Some mentioned the vows were for 15 minutes and people applauded for the couple after the nuptials.

Last year in February, revealed this was the happiest moment of his life after he went down on a knee to pop the question. After saying ‘YES’ to her boyfriend she posted a selfie of her rocking her dazzling new diamond engagement ring. The couple is happily married and often gush about their love life on social media. They met in 2016 when Chris and Melissa had played lovers in the CW show Supergirl. At the time, she was still married to Blake Jenner. After her divorce with him in December 2016, she started dating Chris. At the time, Blake and Melissa who tied the knot in 2013 filed the divorce after their differences.

Colorado-born Melissa Benoist was born on October 4, 1988. She possesses American nationality. Multi-talented Melissa is an actress and a singer. Melissa Benoist is well-known among the media and the public because of her character in “Supergirl”. It is an American superhero action-adventure drama television series where she plays the character of Kara Zor-El/Kara Danvers/Supergirl. See more bio…

You may also read- Carrie Symonds, the girlfriend of British PM, Boris Johnson is pregnant and engaged!