Supreme Patty is currently dating American model Meghan Marie. They keep on posting their pictures on social media sites. They seem very happy together and recently they are residing in Dayton Beach in a separate house.

As well, he is successful in hiding his past relationship from social media sites. 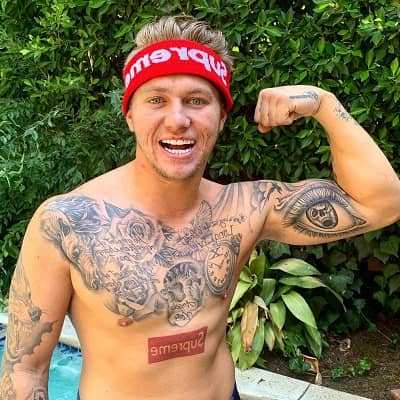 Who is Supreme Patty?

Supreme Patty is an American comedian and entertainer who gained popularity through Instagram. He is also known as a prankster, stuntman, and rapper.

He has earned millions of followers through his social media career.

The real name of Supreme Patty is Patrick Wallace. He was born on December 18, 1997, and his hometown in Daytona Beach, Florida, and his current residence in Los Angeles, California, USA.

His zodiac sign is Sagittarius. He holds American citizenship and his ethnicity is Caucasian. He belongs to the Christian religion.

As talking about his family, his father’s name is Bill and his mother’s name is Angie Wallace. He was raised by a single mother. When he was 3 years of age his parents got separated. As well, he is not on talking terms with his father Bill.

He has a beautiful sister Katie with whom he grew up as well she was featured in his first-ever Instagram photo. Moreover, his mother worked in a nursing home to support the family.

Patrick has attended Sugar Mill Elementary School and for middle school, he has joined Ormond Beach Middle School. He dropped out of his study after involving with the wrong people. He started using drugs and later he became drug-addicted.

After some period of time, he became the victim of depression and also tried to attempt suicide. He even went to the rehabilitation center for treatment and after coming out of rehabilitation he joined high school.

Prankster has also graduated and earned a certificate from General Education Development ( High School Diploma). Later, he joined ‘Santa Fe College’ which is in Gainesville, Florida.

He created the name Supreme Patty through an online name generator. Patrick has started posting his comedy skits on his Instagram account in March 2017.

Likewise, his first vine which was got viral was him eating three hot dogs in less than 5 seconds. Later, the video is also got ‘reposted’ by  Actor Orlando Bloom. Gradually, he became popular for his vines and offensive pranks.

Similarly, he started posting posts related to stunts and challenges. He even got arrested or hospitalized due to his offensive pranks and stunts. He was very crazy about posting videos he also made videos by doing risky activities. As his most dangerous stunts include squeezing lime in his eyes before snowboarding because of his stunts he was hospitalized.

Prankster has also created his own Youtube Channel named ‘Supreme Patty TV’ in April 2015. His content includes pranks, stunts, challenges, and music videos. Supreme’s first post on youtube was entitled ‘Supreme Patty & A. Millz’ which has now a million-plus views and his music video titled ‘MAD’ has earned more than a million views.

Besides prankster, he is also a rapper. He released his first video titled ‘Money On My Mind’ on September 13, 2019, and his other videos include ‘On Go’, Road Runnin, Focus, etc.

As a social media personality, he has earned a burly amount of money through his successful career. His crazy stunts paid off so well, by the start of 2022 his estimated net worth is $20,000, 2022 ($80,000) and by the end of 2021 his net worth increases up to 2 million dollars. Currently, his net worth has reached up to 3 -4 million Dollars due to advertising and public support.

He has a blue pair of eyes and has blonde colored hair. Patrick’s shoe size is 1o.

Patrick has owned fame through the social media platform, he is a social media influencer. He has earned a very good amount of fan followers on his social sites.