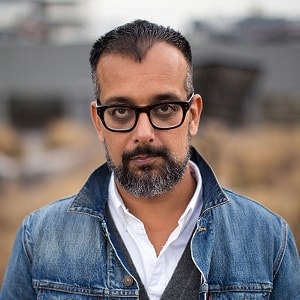 What is the relationship of Suroosh Alvi?

Suroosh Alvi is a married man though he has not revealed his spouse name. He has been blessed with a son whose name is also unknown. He is living In New York City with his family.

Who is Suroosh Alvi?

Suroosh Alvi is a Canadian journalist, filmmaker, and co-founder of VICE magazine. He is an excellent journalist and covers stories from conflict areas around the world. Also, he works as an expert on global youth culture and music.

He was born on March 26, 1969, in Toronto, Ontario, Canada. He is currently 53 years old and his birth sign is Aries. His father’s name is Sabir A. Alvi and his mother’s name is Sajida S. Alvi. His father is a former professor of Psychology at the University of Toronto and his mother is an academic woman whose focus is on Islamic Studies and Mughal history and is currently professor emerita at McGill University.

He is from a Pakistani family and he is currently living in New York City, New York, US. He holds Canadian citizenship and her ethnicity is Pakistani-Canadian.

He graduated from McGill University with Philosophy degree. Other information regarding his school education is not available.

He founded VICE along with Shane Smith and Gavin McInnis in 1994 in Montreal, Canada. VICE is mainly focused on arts, culture, and news topics and it has expanded and diluted into Vice media, which includes divisions including a film production company, the magazine, and website, a record label, and a publishing imprint.

He reported a segment on the ‘Gun Markets of Pakistan’ in 2006  and he has traveled around the world as a journalist and covered stories and reported areas of conflict and war zones like the Democratic Republic of Congo, Pakistan, Afghanistan, and the Gaza Strip. He has produced and hosted award-winning documentaries on conflict minerals in Congo, the war in Iraq, and the rise of the Taliban in Pakistan and also included other controversial issues, movements, and subcultures across the world.

Suroosh created VICE Music in 2002 which has partnered with over 50 artists and sold more than 7 million albums worldwide. He launched a partnership between VICE Music and Warner Bros Records in 2011.

He worked as an executive produced and co-directed the VICE Film Heavy Metal’in 2007 in Baghdad which is a documentary that follows the Iraqi heavy metal band Acrassicauda from the fall of Saddam Hussein in 2003 to the present day. The film was selected officially at the 2007 Toronto International Film Festival and the 2008 Berlin Film Festival. It was also named Best Documentary at the 2008 Warshaw Film Festival.

He also served as a guest curator for the PHI Center in Montreal in 2014. Some of the television series documentaries include ‘Vice Meets’, Úpgrade’, ‘Vice News’, ‘World of Vice’, ‘Toxic Amazon’, ‘Tokoloshe’, and many more.

His work for VICE on HBO and VICE News together received both Emmy and Peabody awards.

He won The Webby Awards in the category News and Politics: Individual Episode for ‘The Vice Guide to Congo’ in 2012 and Warsaw International Film Festival in the category Heavy Metal in Baghdad in 2008.

It is estimated that he has a net worth of around $450 million and his main source of income is his professional career.

He is secretive about his personal information. He has not been involved in any rumors, controversies, or scandals in his professional and professional career.

He has got black hair and black eyes. His information about his height, weight, etc. are unknown.