Susan Barnett is a married woman. She married a dermatologist and surgeon, Dr. Greg Persichetti. They exchanged marital vows in the presence of family members.

The couple is blessed with two sons, Blase and Steele, and one daughter, Cruise Theresa.

They are happily living a peaceful life in Newtown Square, Pennsylvania. Likewise, there is no sign of divorce or separation in their love life. 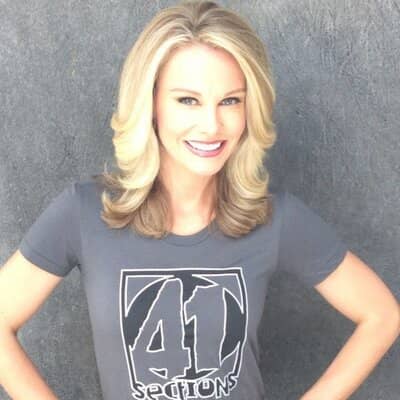 Who is Susan Barnett?

Susan Barnett is a six-time Emmy Award-winning American journalist and television news anchor. Susan Barnett is popular for her work on the KYW-TV. Moreover, she also competed in Miss Teen USA 1990 and Miss USA 1996.

Susan Barnett was born on October 24, 1972, in Levittown, Pennsylvania.

However, she was born and raised in Pennsylvania by her parents. Likewise, she might be the only daughter of her parents. She hasn’t revealed any details regarding her parents and siblings.

At age 17, Barnett had already won the Miss Pennsylvania Teen USA title and competed in the 1990 Miss Teen USA pageant.

Barnett holds an American nationality. Her birth is Scorpio. Regarding her education, she is well educated and earned a Bachelor of Arts degree in Mass Communication with a Minor in History from the University of Delaware in 1994.

Prior to this, she attended Harry S. Truman High School in Levittown, Pennsylvania.

Susan Barnett is mainly a professional Journalist and News Reporter. She started her career at Bridgeport, West Virginia, anchoring WDTV.

Due to her perfect anchoring skills, she eventually did her first-morning news role for WCIA in Champaign, Illinois.

In 1999, she became the morning and noon co-anchor of CBS-owned KDKA-TV in Pittsburgh. In 2003, she moved to Miami and co-anchored the weekday morning newscasts at WFOR. She joined UPN sister station WBFS in October.

Barnett then joined KYW-TV in Philadelphia on January 2, 2006. She came into the limelight for her excellence in anchoring.

Moreover, she became the full-time weekday evening co-anchor, replacing Alycia Lane in April 2008. She left the station after the expiry of her contract at the end of March 2013.

Susan won the Miss Pennsylvania Teen USA title at the age of 17. Likewise, she stood first in the swimsuit competition.

She marked her place in the top 6 finalists in the nationally televised pageant.

Speaking on her income, Barnett makes a decent sum of money through her successful Journalist career. She has an estimated net worth of around $5M. Barnett is living a lavish lifestyle through her income.

Barnett is a pretty woman who looks no less than a heroine. She has a great charm and personality.

She stands at a height of 5.7 feet and weighs moderate. Her hair color is blonde and her eyes are blue.

Susan is quite popular on social media platforms. She has around 2.8k fan following and 3.4k tweets on Twitter. Likewise, her Facebook handle has around 17.3k followers.