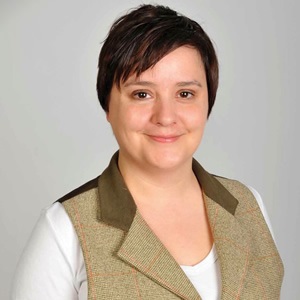 I've always known I was gay. I went out with a couple of men when I was 17 to check.

Susan Calman got married to a fellow lawyer, Lee in 2016. It has been said that they were dating for 9 years.

Then in 2012, they performed their civil union ceremony. In 2016, this couple exchanged vows.

At present, Susan and Lee live in Glasgow with their five cats.

Who is Susan Calman?

Susan Calman is a Scottish comedian, television presenter, plus panelist. She appeared in shows like The News Quiz and I Guess That’s Why They Call It The News.

She at present will host Cruising on Channel 5.

She was born as Susan Grace Calman on 6 Nov 1974 in Glasgow, Scotland. Her ethnicity is Scottish.

She is a daughter of  Sir Kenneth Calman (father) and Anne Wilkie (mother). She also has a sister and a brother.

Susan had gone to The High School of Glasgow and then went on to study law at the University of Glasgow.

Susan Calman was the semi-finalist of the BBC New Comedy Awards in 2005 and was a finalist in another show, Funny Women competition (2006). In 2007, Channel 4’s sketch show Blowout won a Scottish BAFTA.

She also featured in show The News Quiz. Then in 2014, she joined as a panelist on The Dog Ate My Homework for 10 episodes. In 2016 she had also appeared on the first episode of Dara O Briain’s Go 8 Bit and in 2017 she became the presenter of the BBC1 quiz show The Boss.

She has also appeared as a narrator for Channel 5’s show Undercover Girlfriends in 2018.

The estimated net worth of this TV presenter and comedian is around $1 million.

In 1993 at the age of 19, Susan came out as a lesbian and has explained the difficulties of growing up as gay in Glasgow.

Susan Calman has a height of 4 feet 11 inches but her weight is unknown. Her hair is in black color and eye color is dark brown.