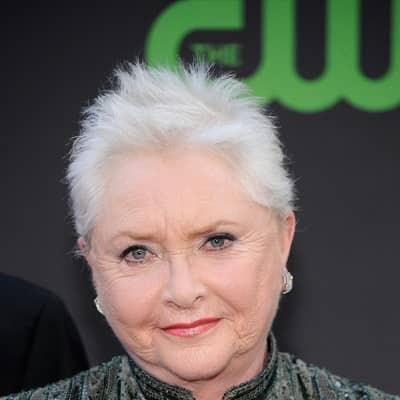 Currently, Susan is single and happily living with her daughter, Blaise. Being a lesbian, the question of whether she has a husband or not is unseen.

It is believed that Susan Flannery is a lesbian. Following the fact, she also lived with an actor, Fannie Flagg for 8 years without letting it known to anyone.

Flannery has a daughter named Blaise and she was adopted in 1987. Blaise is presently studying at the Macquarie University in Australia.

Who is Susan Flannery?

Susan Flannery is one of the all-time famous American soap opera actresses as well as a legendary actress in Hollywood.

Flannery is widely known for featuring in the American daytime soap operas ‘Days of Our Lives’ and ‘The Bold and the Beautiful.

Susan Flannery was born on 31 July 1939. As of 2021, her age is 82 years old. Likewise, her birthplace is Jersey City, New Jersey, the USA. However, Flannery was raised in Manhattan and spent her later childhood there only.

Well, the honored star has not revealed any of her family backgrounds. Presently, her father’s and mother’s details as well as her sibling’s details are also behind the curtain.

Talking about nationality, Susan holds American nationality whereas she is of Caucasian descent.

From her childhood, Flannery aimed to be an actress. To pursue her career, she took her BFA degree in theatre from Stephens College which is in Missouri.

Flannery, after ending her educational life, shifted to New Y0rk City to work in theatrical plays. Also in the 1960s, the star had transferred to Los Angeles and began auditioning for film and TV roles.

Similarly, the star began to emerge in different movies as well as television series. Those series run for several seasons. She is famed for an act in Days of our Lives. The show operates from 1966 to 1975.

Her most successful and worldwide recognizing role was in the American soap opera  The Bold and The Beautiful. Flannery bagged the Daytime Emmy Award for Outstanding Lead Actress in a Drama Series thrice in 2000, 2002, and 2003 respectively.

Furthermore, the 81years actress has emerged in the films such as Guns of Diablo, The Towering Inferno.  For her outstanding performance, Flannery received the Golden Globe Award for New Star of the Year, The Gumball Rally, Anatomy of a Seduction, and Money on the side.

Some of her notable movies are The Moneychangers, Anatomy of a Seduction, Women in White, and so on.

Likewise, the all-time respected actress has also featured in television such as

Presently, Susan is not active in her profession. Flannery stepped down from the acting industry due to her bad health as she is a patient with fibromyalgia. The star has remained an inspiring icon in soap operas.

However, she has earned massive income from her long period of career. It is believed that Susan has an estimated net worth of nearly $9 million. Her main income source was from the acting and entertainment industry.

Additionally, Flannery has featured in hit movies leading her to earn high money. Susan has not revealed her assets and property details till now.

It is surprising to know that the famous and in-demand personality during her era still has been able to keep her low profile. Till now, Susan Flannery has not been part of any sort of controversy or rumors.

It seems that the legendary actress does not prefer to share her private things in public and become part of the controversy.

The stunning actress has maintained her body and health which still makes her young. Susan stands tall with an impressive height of 5 feet and 11 inches and weighs 70 kg.

Furthermore, the beautiful actress has grey hair color as well as blue eyes. Also, her body measurement is 36-25-33(chest-waist-hip) inches.

During her era, she had perfect body shapes and figures. Nevertheless, she has put on some weight in the later years of her career. Flannery has not revealed her exact body weight measurement till now.

However, we cannot find her on other social media. It seems that Flannery is not a social media freak.

Moreover, it looks as she enjoys private life and does not want to become part of any social media.