Susan Lucci is an Emmy-award winning actress and NY Times best-selling author. Susan is married to her boyfriend, Helmut Huber since 1969 and has two childre.

Susan Lucci is a married woman. She is married to Chef Helmut Huber. The pair married on 13 September 1969.

They have two children together, Liza Huber and Andreas Huber. Their marriage is going strong as there is no news regarding any extramarital affairs at present. 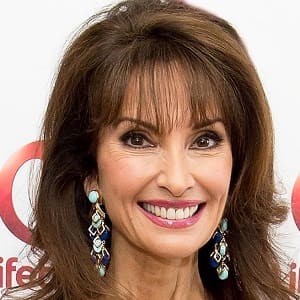 Erica Kane is probably the best role ever written for a woman.

It's really an honor to be nominated. But it is much better to win.

Who is Susan Lucci?

Susan Lucci is an American actress, television host, author, and entrepreneur. People mostly know her for her role as Erica Kane on the ABC daytime drama ‘All My Children.’

Lucci was born as Susan Victoria Lucci in Scarsdale, New York on December 23, 1946. She was born to parents Victor Lucci and Jeanette Lucci. Throughout her childhood years, she grew up in Yonkers, New York.

Furthermore, she belongs to the mixed ethnic background of Italian, Swedish, German, and French.

Talking about her education, Lucci attended Garden City High School. In addition, she later graduated from Marymount College with a BA degree in drama.

Susan Lucci initially appeared in the TV series ‘Love Is a Many Splendored Thing’ in 1967. Additionally, she later appeared in ‘Goodbye, Columbus’ and ‘Me, Natalie.’ In 1982, she had roles in ‘Young Doctors in Love’ and ‘The Love Boat.’ Susan portrayed the role of Gina Edwards in the TV series ‘Fantasy Island’ in 1983.

Since then, she has appeared in several other movies and television series. All in all, she has over 30 credits as an actress.

Some other movies and television series that Lucci has appeared in include ‘Difficult People’, ‘Devious Maids’, ‘Joy’, ‘Hot in Cleveland’, ‘Army Wives’, ‘All My Children’, ‘That’s So Raven’, ‘Higglytown Heroes’, ‘Hope & Faith’, ‘Blood on Her Hands’, ‘Ebbie’, ‘Seduced and Betrayed’, ‘French Silk’, ‘Between Love and Hate’, ‘Double Edge’, ‘The Woman Who Sinned’, ‘Dallas’, ‘The Bride in Black’, ‘Lady Mobster’, ‘Haunted by Her Past’, ‘Anastasia: The Mystery of Anna’, ‘Mafia Princess’, ‘The Fall Guy’, and ‘Invitation to Hell’ among others.

Furthermore, Susan’s autobiography, ‘All My Life: A Memoir’, was published in 2011.

Lucci won the Daytime Emmy Award in 1999 for her performance in ‘All My Children.’ Additionally, she has also garnered the other 20 nominations for the award.

In 2005, Susan won the Gracie Allen Award. Furthermore, she has also won the OFTA Television Award and People’s Choice Award.

Although Lucci has not been part of any notable controversies herself, however, some of the episodes of ‘All My Children’ received criticisms due to the storyline.

Furthermore, Susan made the news recently after she underwent emergency heart surgery for two blocked arteries in the fall of 2018.

Furthermore, her hair color and eye color is dark brown.

Susan Lucci has kept her heart ailment and surgery secret from her mother! Know the reason why!

Comedian Bob Mortimer is contemplating about future after his friend and co-star Paul Whitehouse had heart health scare earlier this year!