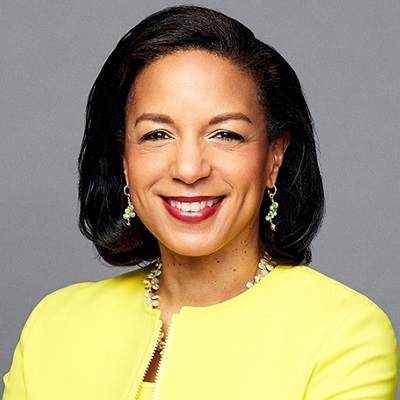 The wedding took place on the 12th of September 1992 at St. Albans School Chapel. The couple happens to be university lovebirds. Together, they are blessed with two children including a son, Jake Rice-Cameron, and a daughter, Maris Rice-Cameron.

Who is Susan Rice?

American Susan Rice is a diplomate and Democratic Policy Advisor. She is also serving as the 27th United States Ambassador to the United States.

Susan Rice was born on 17th November 1964 in Washington D.C. She is of All-American ethnicity with Jamaican roots.

She is the daughter of Lois Rice-Dickson and Emmett J. Rice. Her lt. mother, Lois is an education policy expert whereas her lt. father, Emmett J. Rice was a governor of the Federal Reserve System. Also, he used to be an economics professor at Cornell University.

Her parents got separated from each other via a divorce when Rice was just 10 years old. Her lt. mother, Lois passed away on 4th January 2017 of Pneumonia and Cancer. She has a brother, E. John Rice Jr.

Born in a politically aware family, she always dreamed of being the first U.S senator from the District of Columbia from her childhood. Also, she learned from her parents not to use race as her excuse since those days.

Moving toward academics, she completed her High School education at the National Cathedral School in Washington. Also, she graduated from the school as a valedictorian.

After that, she received a Ph.D. from the University of Oxford in Philosophy.

– She served in the 1988 Presidential election as the foreign policy aide to Michael Dukakis. Following that, she worked as a management consultant at McKinsey & Company.

– In 1993, she joined the former President, Bill Clinton under his administration. At the time, she worked for the administration in various positions including director, special assistant, senior director of the African affairs.

– On 7th July 1988, she visited the Nigerian president-elect Basorun Moshood Kashimawo Olawale Abiola as a member of the American delegation. During the meeting, Moshood had a major heart attack.

– In 2001, she became the principal and director of the political risk consultancy, Intellibridge. The following year, she became the senior fellow at the Brookings Institution. The same year, she also received a Hall of Fame at Standford University. She served the post as the director till 2009.

– On 5th June 2013, she became the National Security Advisor succeeding Tom Donilon. The following month, she swore for the position. She remained in the post till 2017.

– On 8th March 2017, she became the visiting research fellow of the School of International Service (SIS) under American University. In March 2018, she became the board of directors at Netflix.

– In July 2020, she came into the headlines being a possible running mated of President Joe Biden for the 2020 general election. However, the vice president, Kamala Harris was selected as the running mate for the president.

As per the financial report of 2011, her estimated net worth ranges from 23.5 million to $43.5 million. Also, the report disclosed that the $8 million of her investment were in the commercial banks whereas nearly $5 million worth of investment was in the oil and gas companies sector.

She has black eyes and black hair. She has a decent height and weight. However, details on her body stats are not available.

During her term as the United States ambassador to the United Nations, the 2012 Benghazi attack took place where the U.S Ambassador to Libya, J. Christopher Stevens, and U.S. Foreign Service Information Management Officer Sean Smith got killed.

Along with the two former Navy SEALS, Glen Doherty and Tyrone S. Woods. For the incident, she made her appearance in the five major interview shows to discuss the attack.