Sweta Singh is an award-winning Indian journalist. Currently, she works for Aaj Tak. Sweta has served for Times of India, Zee News. 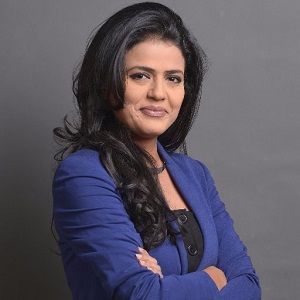 Together, they live with their daughter in Noida, Uttar Pradesh, India.

Who is Sweta Singh?

Sweta Singh is a well-known name in the Indian news broadcasting field. Sweta is a journalist and anchor.

Previously, she used to work for Times of India in her Home Town, Patna.

Presently she works as an Executive Editor for the Indian news channel, Aaj Tak.

Sweta Singh was born on August 21, 1977, in Patna, Bihar. She grew up in Patna and also was educated there.

As a child, she was a good storyteller. As she grew up, she wrote articles for local newspapers, poetry, and personal diaries.

She studied at a local school. Later she graduated from Patna University in Mass Communication.

Sweta Singh started her career in journalism when she was in college. At first, she worked as a freelancer for the ‘Times of India’ in her hometown, Patna.

Afterward, in search of bigger opportunities, she moved to the capital of India, Delhi. There she joined Hindustan Times and Sahara News and worked there for some time.

In 1998, she joined Zee News and was the newsreader/anchor. Then in 2002, she moved to Aaj Tak. Since then she has been working for Aaj Tak.

Presently, she is one of the top news anchors of India. She also works as Executive Editor of Special Programming in Aaj Tak.

She is renowned for hosting debates between politicians. One of the debate programs is ‘Humoursly Aaj Tak with Shweta Singh – ‘The Donkey Meet’.

In 2012, she appeared as herself in the movie ‘Chakravyu’. Additionally, she has also featured in some films as a reporter.

Some of the Indian personalities she interviewed are Shah Rukh Khan, Sachin Tendulkar, M. S Dhoni among others.

Sweta has appeared in India’s national reality shows including Big Boss, The Kapil Sharma Show, and many more.

Sweta aspires to be a director. Additionally, she multitasks everything- cooking, cleaning, baby-bottle feeding, you name it she’s done it!

And of course, repaired printers, video-edited her stories, dabbled in sound mixing, and experimented filming with a camera, and here comes her swan song- she helps colleagues with their make-up.

Moreover, in 2004, she was awarded for her show “Sourav Ka Sixer”, as the best sports channel.

She earns an estimated salary of Rs 1 crore ($140,000 US) per year. According to the sources, Sweta’s net worth is estimated to be $2 Million.

-She criticized Rajdeep Sardesai openly in public. Rajdeep is an Indian reporter and former Editor-in-Chief of Global Broadcast News, including CNN-IBN.

Nidhi Kulpati focuses more in her career since the death of her husband in 2005! Click to know details about her career!!