Sydel Curry is married to Damion Lee on 1st September 2018, at the Charlotte Marriott City Center in Charlotte, North Carolina. Her husband Damion is a basketball player and plays for the Maine Red Claws in the D-league. Their friends and family were invited for their wedding. The couple started dating in 2013, and after five years of affair, they decided to marry. The relationship started in 2011. Damion.

Previously, she dated Ricky Brown, an athlete on the football team, for a brief period of time. But that relationship didn’t work out for a long period of time. So they broke up. 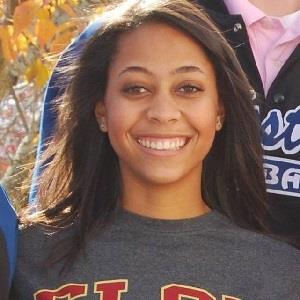 Who is Sydel Curry?

Sydel Curry is a former American indoor volleyball player for Elon University. She is the daughter of former NBA player Dell Curry, and the younger sister of current NBA players Stephen and Seth Curry.

Sydel was born in Charlotte, North Carolina on October 20, 1994. Her nationality is American and her ethnicity is Haitian and Afro-American.

She was born to Sonya and Dell, both were athletes at Virginia Tech.  She has two older brothers: Stephen, the starting point guard for the Golden State Warriors and a two-time NBA MVP, and Seth, who is a member of the NBA’s Dallas Mavericks.

She initially attended a Montessori school that had been started by her mother. From 2001 to 2002, she lived in Toronto during her father’s tenure with the Toronto Raptors, attending elementary school as a first-grade student at Queensway Christian College in Etobicoke, Ontario.

Sydel was actively involved in volleyball since her early age. She became a four-year starter for Charlotte Christian and the team captain for three of those years. Her team advanced to the state quarterfinals for three seasons and she helped post a new school record for most wins in a season in 2012.

She has four-time CISAA All-Conference selection (2009-12) and a two-time NCISAA All-State selection (2011-12) to her name.  she played club for the Carolina Union, attending nationals with the team in 2012.

During her freshman year, Sydel injured her knee during the season and redshirted. Curry had a decent season during her freshmen year. She played in 22 matches on the season, earning the start in nine, was second on the team in assists (360) and assists per set (5.29) while tallying 118 digs and five aces. She posted a career-high 40 assists in a five-set match against UNC Asheville, recorded a career-high 14 digs in a four-set match at Towson, and tallied three double-doubles on the season, and was named the team’s Most Improved.

Sophomore year was Sydel’s breakout year when she officially became a starter. After appearing in 28 matches, she earned the start 24 times. She led the team and ranked 5th in the conference with 851 assists on the season.

Sydel Curry: Salary and Net Worth

Information regarding Sydel’s current salary and net worth is not known as of 2022.

Sydel became a topic of discussion after she announced her retirement from volleyball in February 2017 through social media. She later explained that her injury was the main cause that kept her away from playing.

She was a part of a controversy after she sent out a tweet and a Cavs fan replied to that tweet with an NSFW message that not only was directed at Sydel but also Stephen’s daughter, Riley.