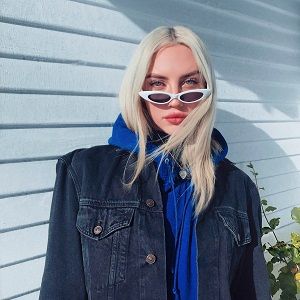 The 21-year-old American Instagram star, Sydney Carlson is an unmarried woman. As of now, she is in a relationship with her boyfriend Blackbear, a musician. They have been dating for several months. Furthermore, the lovebirds have been also spotted several times in the public and media.

Besides him, there was also a rumor of her relationship with Dylan Robbins. However, she didn’t clarify this news. Currently, Sydney and Blackbear are enjoying their love life and living elegantly.

Who is Sydney Carlson?

Sydney Carlson is a popular American YouTuber as well as a beauty guru. She regularly posts various beauty, fashion, and lifestyle videos on her channel.

Currently, she has earned over 111k subscribers on her channel and almost 4 million views. Additionally, she is also an Instagram star with more than 331k followers.

Sydney was born on April 7, 1997, California, United States of America. Talking about her nationality, she is American and her ethnicity is unknown. She is the daughter of Michelle Carlson and Dave Carlson.

Since her childhood, she had a keen interest in beauty and fashion. Concerning in her education, there is not any information regarding her educational background.

Sydney began her career as a YouTuber on July 23, 2013, when she first created her channel. Her first video was A Letter To My Freshman Self.

Since then, she has been posting various beauty, fashion, and lifestyle videos on her channel. Currently, she has earned over 111k subscribers on her channel and almost 4 million views.

Additionally, she is also an Instagram star with more than 331k followers. Besides YouTuber and social media platform, she is also the co-owner of the handmade iPhone case company named Wildflower Cases which she runs with her mother and sister Devon Lee Carlson.

Many of her videos are widely popular on YouTube. Some of her most-watched videos are Affordable and Cute Bikini Haul, Swimsuit Haul & Try On, Welcome to My Diary, Dying My Hair Blonde, and Coachella 2015.

Being a beauty guru and YouTuber, she earns a decent amount of money from her profession. However, her salary and net worth are unknown.

As she has full focus on her profession, she has never been involved in any controversial stuff.

Sydney has a height of 5 feet 9 inches and weighs 53 kg. Moreover, she has a pair of attractive hazel eyes and blonde hair. Besides this, there is not any information regarding her other body measurements.

In addition, she also runs a YouTube channel on which she has amassed over 157k subscribers.

Neil Young reveals that he has married actress Daryl Hannah in August 2018!