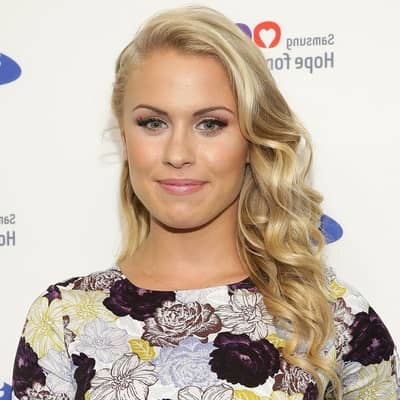 Sydney is now engaged to Matt Martin. He is a left-wing layer of the New York Islanders team.

The couple first started talking through Twitter in 2013. Sydney was then a sophomore in college. And they began dating from New Year’s Eve Party.

The duo gets engaged in March 2018. Matt proposed to Sydney with an Emerald cut Diamond Ring. Sydney has even posted the proposal video on her Instagram.  They are planning to tie the knot in the upcoming days and settling together now in Rosalyn, Long Island.

Who is Sydney Esiason?

Sydney Esiason is a TV sportscaster, sports host, and anchor. She has worked for Sports likely for CBS Broadcast Center, PAULE KA, MAXIM Magazine, and many others.

Sydney was born on August 15, 1992, in New York. She holds an American nationality and is of Caucasian ethnic group.

Her parents are Boomer Esiason and Cheryl Esiason. Her father is a former American football quarterback and current network color commentary.

Likely, her mother is a co-founder and chairman of the Boomer Esiason Foundation. The foundation is formed by her parents from the inspiration from their son.

Sydney grew up along with her brother, Gunnar Esiason. He suffered from cystic fibrosis when he was just 2 yrs old.

Sydney went to Friends Academy School in Locust Valley, New York from 2006 to 2020. Then she attended Boston College, Massachusetts. She graduated with a Bachelor of Arts and Communications.

While in Boston, Sydney was part of the women’s club lacrosse team. She graduated with the class of 2014.

Sydney had done various internships during her college days. Her first intern was working as a PR intern at the Maxim Magazine, Manhattan, New York in the summer of 2011. Then she internet at PAULE KA during June-August of 2012. Followingly, she also was a CBS This Morning Intern in the summer of 2013.

Her first job was working as the Jets Nation Tailgate reporter. She worked there from August 2014 to February 2015. Sydney has also worked as an on-air digital host for the National Hockey Leagues between Nov 2014 to June 2015.

The reporter has also worked as a volunteer at the Boomer Esiason Foundation which aimed at funding research to cure cystic fibrosis. in 2010, she volunteered for the Animal Rescue Fund of The Hamptons.

Sydney holds a net worth of around $1 million.

The average annual salary for a sports anchor ranges between $18,000, to a maximum of $275,000. And so Sydney also has a good salary from her career.

Sydney might have earned an annual salary of around $100,000 from her illustrator career.

So far, the host hasn’t appeared in any controversial news. Similarly, her name hasn’t received any type of rumors ad of now.

Sydney stands with an average height of 5 feet and 6 inches. Her body mass is unknown.

Likely, she has blonde hair with beautiful blue-colored eyes.