Sydney Leroux is a professional soccer player. She is married and blessed with two kids.

Sydney Leroux is married to Dom Dwyer. Dwyer is a British-American professional soccer player. The wedding took place in January 2015 in a private ceremony. They announced the news on Valentine’s Day of 2015. The couple started dating each other in 2014.

Later, on the 28th of November 2018, the couple disclosed that they are inviting their second child. After that, on the 28th of June 2018, they welcome their daughter, Roux James Dwyer. As of now, she is enjoying her motherhood and is focused on her career too. 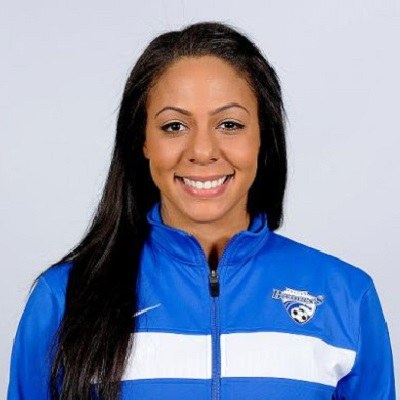 I feel like the worst you can do is boo me and try to make me feel bad. [And] that just makes me hungrier.

it always hurts until it gets better

I have an amazing bubble with my team and U.S. soccer and the support we have in the U.S., my friends, my family, you can’t break that.

Who is Sydney Leroux?

Sydney Leroux is a professional soccer player. She is renowned for her playing style as a striker.

Currently, she plays for Orlando Pride in the National Women’s Soccer League.

Sydney Leroux was born on the 7th of May 1990 in Surrey, British Columbia. Her birth name is Sydney Rae Leroux Dwyer. Also, she holds Canadian plus American nationality and is of British-French ethnicity.

Her father, Ray Chadwick, and mother, Sandi Leroux also comes from an athletics background too. Chadwick is a former baseball pitcher who played for California Angeles. Also, Leroux used to play for the Canadian national softball team.

She has four siblings that including two brothers Tye and Tory and two sisters, Shayla and Novara.

She graduated from the Johnston Heights Secondary School in Surrey. In school, she used to be a leading soccer player.

After that, in 2008, she joined the University of California at Los Angeles. In 2011, she graduated from the University. During university, she used to play for the college team.

Moving forward, in her Junior year, she was ranked the fifth in the University’s history with 91 points. Later, she moved to the fourth position with 126 points.

– At the age of 15, Sydney Leroux started her professional career with the Vancouver Whitecaps. For the club, she played in the 2005 W-League season making her the youngest player in the league. However, she continued her club career in 2011.

– In 2012, Atlanta Beat selected her in the 2012 WPS Draft. The same year, she joined Seattle Sounders Women in W-League. Also, she made her appearance in the Summer Olympics too.

– In January 2013, she joined Boston Breakers along with her fellow teammate Heather O’Reilly and Heather Mitts. She ended the season with 11 goals.

– Later, in March 2015, she was traded to Western New York Flash. However, she played three games in the season as she participated in the 2015 FIFA Women’s World Cup.

– At the age of 14, she started her international career in Canada. For the country, she attended the 2004 FIFA U-19 Women’s World Cup. Also, she was the captain of the under the 15 team for the country.

– In 2012, she represented the United States in the 2012 Algarve Cup. The same year, she became the youngest member to earn a gold medal in the 2012 Summer Olympics.

Throughout her career as a footballer, As of 2022, she has managed to make a net worth of $3 million.

Her earnings as a National Women’s Soccer League player are in the range of $16k to $46k. On average her yearly income is in the range of $421k or above yearly. Besides that, she also earns through her brand endorsements including Nike, BODYARMOR, and Nestlé Nesquik.

Also, her husband, Dom Dwyer has a net worth of $2 million.

In 2019, she drew the attention of many internet users when she posted her pictures on Twitter. In the pictures, she was engaged in the preseason training hosted by Orlando Pride. At the time, she was 5.5 months pregnant. For that, the training campaign faced a huge backlash.

However, in the post, she was not engaged in detrimental activities.

Sydney Leroux has black eyes with black hair. Her height is 5 feet  7 inches and weighs around 66 kg.