American R&B and soul singer known for being the co-host of the talk show. 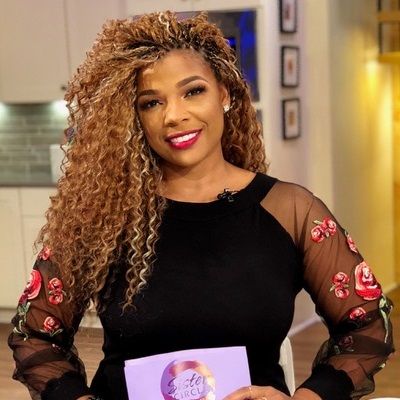 Syleena Johnson is happily married to Kiwane Garris. Their wedding ceremony was held on 1st July 2007. Kiwane is a worldwide journeyman basketball player who has played for various NBA and EuroLeague teams.

They are the parent of two children Kiwane L. Garris, Jr. and Kingston Garris. Kiwane was born on 1st August 2007 after forty-eight hours of labor. Similarly, her second child was born on 6th February 2011.

Their marriage did not work out so they divorced some years later.

Who is Syleena Johnson?

Syleena Johnson is an American R&B and soul singer known for being the co-host of the talk show. She is a songwriter and actress as well.

Johnson works under the label Jive, Aneelys, Shanachie Records, and Entertainment One.

She is the daughter of Syl Johnson and Brenda Thompson. Her mother was the first black female police commissioner of Harvey, Illinois.

Her father is from a musical background but she was influenced by artists like Aretha Franklin, AI Green, Tina Turner, Mavis Staples, and Michael Jackson.

Similarly, she has a brother Chad Johnson and two sisters Syleete DeBois and Syleecia Thompson.

Johnson attended the Thornridge High School in Dolton, Illinois. Similarly, she educated at Drake University in Des Moines, Iowa. In the year 1997, she transferred to Normal’s Illinois State University and majored in music.

Syleena signed with Jive Records and made few appearances on the R&B music scene. In the year 1995, she released her album This Time Together By Father And Daughter. On 26th January 1999, she released her debut album Love Hangover.

Her other albums are Love Hangover, Love, Pain & Forgiveness, The Voice, The Flesh, Labor Pains, Couples Therapy, and Woman.

Moving towards her acting career, she appeared in the 2004 short video Kanye West Feat. Syleena Johnson: All Falls Down. After that, she appeared in Dishing Tea with Big Meach, Soul Kittens Cabaret, Couples Therapy, Touched and Six 2 Six.

She is going to appear as Jackie Jones in the post-production Equal Standard.

Her husband Kiwane Garris has a net worth of $300 thousand.

Recently in February 2020, she shared her opinion on fans who still listen to R. Kelly’s music. She expressed that all fans should be able to listen to R.Kelly’s songs without the attachment of his current legal trouble.

Syleena has brown hair and black eyes. She is 5 feet 10 inches tall and weighs around 81 kg. Previously, she was 107 kg which she shredded to 81 in eight months. Likewise, she revealed her weight loss on Instagram.