Currently, she is in a relationship with her partner Shawn Townsend.

They are in a healthy relationship and they lived together on the Southwest Waterfront. 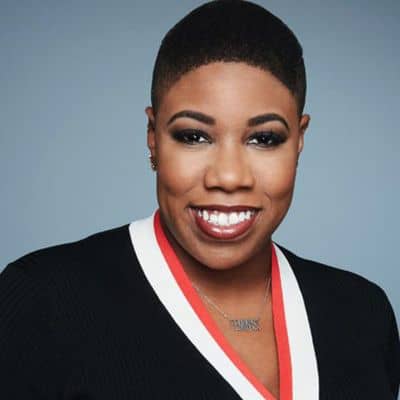 Who is Symone Sanders?

Symone Sanders is an American author, political strategist, and commentator.

She rose to the limelight after, she became the chief spokesperson and a senior advisor for Vice President Kamala Harris.

Moreover, She worked as national press secretary for Democratic presidential candidate Bernie Sanders during his 2016 presidential campaign. Unfortunately, she left the campaign.

Further, she holds an American national identity and ethnicity of African-American. According to the astrologist’s birth chart, her zodiac sign is Sagittarius.

She was born to her father, Daniel Sanders, a retired Army corps from the U.S. Army Corps of Engineers, and her mother, Terri Sanders, a former publisher of the Omaha Star as well as former executive director for the Great Plains Black History Museum.

Talking about her educational background, she completed her primary level at Sacred Heart Catholic School and graduated from Mercy High school. Later on, she earned her bachelor’s degree from Creighton University in business administration.

Since she was a child, Symone Sanders was very interested in hosting and wanted to grow up to host her own television show.

For the first time, she served at Time Out Foods in Omaha, a Black-owned restaurant.

In 2014, she served in the communications department of Jim Suttle, a former Omaha Mayor, as well as worked as deputy communications director for Democratic gubernatorial candidate Chuck Hassebrook.

Later on, in 2015, to work as a national press secretary, she joined the Bernie Sanders 2016 presidential campaign in August 2015.

In December, Symone was listed as one of 30 women under 30 who would shape the 206 elections, by fusion.

Sadly, in June 2016, Sanders resigned from the Sanders campaign and entered CNN as an analyst and commentator.

In the same year, Sanders was named as one of 16 Young Americans Shaping the 2016 Election by Rolling Stone magazine.

In 2020, she entered the presidential campaign of former vice president Joe Biden.

As well as, Symone Sanders published a memoir, No, You Shut Up. Later on, On November 29, 2020, it was announced that Sanders was anointed chief spokesperson and a senior advisor for Vice President Kamala Harris

Luckily, sanders got an opportunity to host both a weekend program and a show airing on MSNBC’s subscription program, The Choice on Peacock according to the MSNBC announcement.

Her personal earnings have not been revealed yet, but according to the other sources, her annual net worth is estimated at $1 million-$2 million.

Talking about her rumors and controversy, in late June 2016, she left the campaign Bernie Sanders 2016 presidential campaign, because “she was not let go and that leaving the campaign was her decision” as per her sayings.

Symone is a tall woman, whose height stands at 5 feet 9 inches and weight of 87 kgs. Moreover, her waist size is 33inch, her Hip size is 44 inches and her bra size is 48F.

Moreover, she has black short hair with black pairs of eyes.

Talking about her social networking sites, her verified Instagram account has more than 178K Followers with 3062 Followings under the user id @symonedsanders.

In addition, she has verified Twitter accounts, with more than 437.3K Followers and 6993 followings Under the User id Symone D. Sanders.

Bill Maher: Read about his N-word controversy, his apology and more!