T. D. Jakes is a married man. He is married to Serita Jakes. The pair married on May 29, 1982. They have five children from this marriage, Sarah Jakes Roberts, Cora Jakes-Coleman, Jamar Jakes, Jermaine Jakes, Thomas Jakes, Jr. The marriage is going strong as there is no news regarding any extramarital affairs at present. 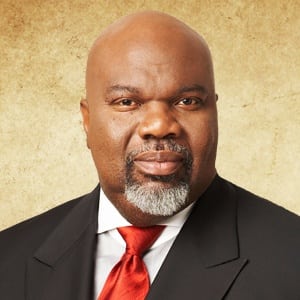 Each day is God's gift to you. What you do with it is your gift to Him.

T. D. Jakes is an American pastor, author, and filmmaker. Currently, he is the pastor of The Potter’s House, a Nondenominational American megachurch.

T. D. Jakes was born in South Charleston, West Virginia on June 9, 1957, to parents Odith Jakes and Ernest Jakes, Sr. Throughout his childhood years, he grew up in Vandalia and attended local Baptist churches. As of 2021, he is 64 years old. He worked in local industries during his teenage years. He is of American nationality. Furthermore, he belongs to an African-American ethnic background.

Talking about his education, Jakes attended West Virginia State University. He later dropped out of the university. Furthermore, he completed a B. A. and M.A. in 1990. In addition, he also completed Doctor of Ministry in Religious Studies from Friends International Christian University in 1995.

Jakes initially took a job at the local Union Carbide and also continued preaching part-time. Additionally, he became the pastor of the Greater Emanuel Temple of Faith in 1982. In addition, he began a radio ministry The Master’s Plan. He was later ordained as a minister of the Higher Ground Assembly. Jakes also began television ministry, ‘Get Ready’. It aired on Black Entertainment Television and the Trinity Broadcasting Network.

T. D. Jakes has also purchased the former facilities of Eagle’s Nest Church. The Potter’s House has grown to a congregation of 30,000. In 2015, Jakes became the host of ‘T.D. Jakes’. It was later canceled due to poor ratings and low clearances. Some of Jakes’ writings include ‘Loved by’, ‘Intimacy With God’, ‘Loose That Man And Let Him Go’, ‘Reposition Yourself: Living a Life Without Limits’, ‘Lay Aside the Weight’, ‘Overcoming the Enemy’, ‘Destiny: Step Into Your Purpose’, and ‘Soar!: Build Your Vision from the Ground Up’ among others. Additionally, his filmography credits include ‘Woman Thou Art Loosed’, ‘Not Easily Broken’, ‘Jumping the Broom’, ‘Sparkle’, ‘Miracles from Heaven’, and ‘Heaven Is for Real ‘.

Jakes has received 13 honorary degrees and doctorates. His album ‘A Wing and a Prayer’ won in the category of Best Gospel or Chorus Album during the 46th Grammy Awards in 2003. In addition, he also garnered the nomination for Black Reel Award.

Jakes has not revealed his current salary. However, he has an estimated net worth of around $20 million as of 2022.

Talking about his body measurement, Jakes has a height of 6 feet 3 inches (1.91 m). Additionally, he is bald and his eye color is dark brown.

Also find out more about another American pastor, John Hagee.