T. J. Holmes is a TV journalist, who anchors GMA3: What You Need To Know. Holmes is married to Marilee Fiebig and has three children.

T. J. Holmes has been married twice in his life.

After that, he married Atlanta-area attorney, Marilee Fiebig on March 1, 2010, in Memphis, Tennessee. They together had a daughter named Sabine Holmes, born in January 2013. The couple has been married for twenty-two years now and their relationship is still going fine.

His first wife was Amy Ferson. There is no information about their dating history. Their marriage date has not been disclosed yet. The couple together had two children, a daughter named Brianna Holmes and a son named Jaiden Holmes. The couple divorced in the year 2007. 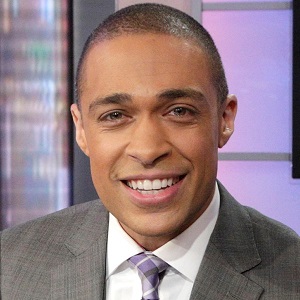 T.J. Holmes is an American journalist and national television personality. T.J. Holmes is best known as a former anchor and correspondent for CNN. He currently works for ABC News as the co-host of the overnight news program World News Now (WNN).

Holmes was born as Loutelious Holmes, Jr. on August 19, 1977, in West Memphis, Arkansas, U.S. His nationality is American and he is of African-American ethnicity.

He is the younger of two children of American parents. There is no information about his parental background.

He was educated at West Memphis High School. After high school graduation, he attended the University of Arkansas where he earned a degree in broadcast journalism.

Holmes started his television career at KSNF Channel 16 in Joplin, Missouri. He spent less than a year at KSNF as a producer, assignment reporter, and weekend anchor.

After that, he moved back to his home state of Arkansas in 2000 to join CBS affiliate KTHV in Little Rock as a general assignment reporter. Within a year, he was promoted to weekend anchor.

He joined CNN as a news anchor and correspondent in October 2006. He co-anchored CNN Saturday & Sunday Morning with Betty Nguyen until March 2010.  Holmes left CNN in 2011 and signed a deal with BET Networks.

In August 2012, BET Networks announced that Holmes will be the host of their new original series Don’t Sleep. The show was canceled in March 2013 and he left BET.

After that, Holmes joined MSNBC and appeared as a substitute anchor on Weekends with Alex Witt and NewsNation with Tamron Hall.

Holmes joined the ABC News Team on September 26, 2014, as a substitute anchor on the overnight news program World News Now (WNN) and America This Morning.

He also filed reports for Good Morning America. He became the permanent co-host of WNN on December 23, 2014. Since then, he works for ABC News as the co-host of WNN.

T. J. Holmes’ net worth is $5 Million according to the sources of 2022. Whereas his salary is unknown.

Holmes’ hair color is dark brown and his eye color is green. His height is 5 feet 7 inches and weighs 87 kg.