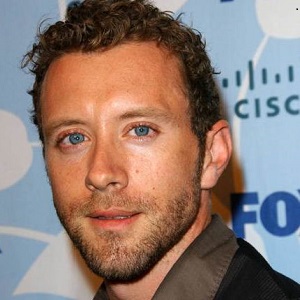 I did theatre all my life and then went into the film world. I then kind of segued into TV land, which is a different experience

The opportunity to be a storyteller is the greatest thing in the world, and I feel so lucky and really love it

I think the people who probably have it the best are the people on cable like on 'Entourage', 'the Sopranos', etc. who have 13 episodes per season and breaks to do films and theatre. I think that's the most ideal life.

Previously, T.J. Thyne dated Michaela Conlin, an actress from “Bones” as Angela Montenegro for several years but they broke up after about a year in 2010. T.J.

T.J. Thyne is an American actor/producer. He is known for his roles in Bones as Dr. Jack Hodgins, an entomologist and in One Dry Run for which he was even nominated for Festival Prize in the year 2011.

Thyne was born as Thomas Joseph Thyne on 7 March 1975 in Boston, Massachusetts, US. His nationality is American and ethnicity is Caucasian.

He is one of the six children of John J. Thyne II (father) and Catherine Thyne (mother). He has brothers named John III and Tones and sisters named Hazel, Katie, and Shelly.

He went to East Bridge Middle School in Ridgefield, Connecticut. Then, he moved to South to attend High school in Plano, Texas.

He graduated from USC School of Dramatic Arts in 1997. His brother- Tone is a television producer and John III is an attorney.

T.J. Thyne debuted in TV series through a famous series- Friends in 1998 and in film from a comedy film, ED tv as Frat Guy in 1999. His role in the TV series, Bones is admirable as well. He has had guest roles in many series like Cold Case, Boston Legal, CSI: Crime Scene Investigation, etc.

In 2001, he co-founded a group that offered workshops and professional development for actors in the Greater Los Angeles Area, named Theatre Junkies. He collaborated with theater junkie Kuenne in 2007  and produced a film- Validation for which he has won several awards in film festivals.

This film has hit millions on youtube. He co-produced and starred in the film Shuffle in 2010. He was nominated for the award of the Best Showcase Short Film for the film- One Dry Run (2010) in SoHo International Film Festival in 2011.

Thyne has a net worth of $10 million. His current salary is not known.

There are no rumors and controversies in connection with the actor/producer. He has maintained his good reputation in Hollywood till the date.

T.J. Thyne has a height of 5 feet 7 inches and has an average body weight. He has brown hair and blue eyes.