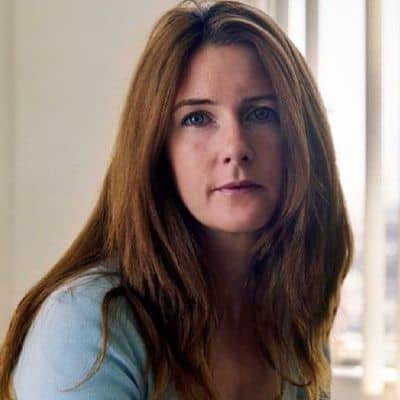 Talking about her love life, Tabitha Soren is happily living a married life with Michael Lewis. Michael is a well-famed American author and financial journalist who has been a contributing editor to Vanity Fair.

The couple tied the knot on 4 October 1997 and is presently living with three children named Quinn, Dixie, and Walker. The couple lost their previous daughter named Dixie Lewis who was born in April 2002 who died with her boyfriend Ross Schultz in a head-on car accident near Truckee, California on 28 May 2021.

Who is Tabitha Soren?

Tabitha Soren is a well-recognized American fine art photographer and past journalist for MTV News, ABC News, and NBC News. Soren is widely famed as the face of ‘Choose or Lose’, ‘MTV’s young voter campaign.

Moreover, she has emerged in the music video, You Gotta Fight For Your Right that earned great success.

Tabitha Soren was born on 19 August 1967. At present, her age is 53 years old. Likewise, her birthplace is San Antonio, Texas, the USA.

Not much known about her father and mother’s details, Tabitha has been secretive towards her family details. Moreover, her siblings’ details are behind the curtain.

Talking about her nationality, Soren holds an American identity whereas her ethnicity is Caucasian.

Regarding education, the great personality completed her high school at Hampton High School. Likewise, she completed her graduation from New York University with a degree in journalism. Later, Tabitha joined Standford University to learn art and photography.

Professionally Tabitha is a well-named photographer and past journalist. Apart from this, she has appeared in the 1987 music video for (You Gotta) Fight for Your Right(To Party) by the Beastie Boys. Likewise, she also led MTV’s Choose or Lose campaign that targeted encouraging young adults to vote at the age of 23.

Additionally, the campaign earned a Peabody Award in May 1992. Soren has also interviewed Hillary Clinton, Anita Hill, and Yasser Arafat. The renowned journalist also worked for television news channels for many years which consist of MTV News, ABC News. However, she quit her profession to study photography.

After completion of her education, Tabitha began working as a fine arts professional photographer. Her works began to get released in magazines such as The New York Times, Canteen, Vanity fair, New York, and so on. Moreover, Soren also started the public collections which are displayed at the Los Angeles Museum of Art, Oakland Museum of California, New Orleans Museum of Art, Pier 23 Photography, and so on.

In the year 2012, Soren’s show Running emerged at the Indianapolis Museum of Contemporary Art. After a long wait, the photographer exhibition Fantasy Life debuted at the Koepkin Gallery in Los Angeles and traveled to the San Franciso Bay Area in 2015.

Her collection of Fantasy Life was published by the Aperture Foundation in 2017. Similarly, the book was released in an exhibition at San Francisco City hall which was named Fantasy Life and it displayed more than 180 of Tabitha’s images.

A prominent photographer has earned a fabulous amount of money from her multiple profession. her main source of earning is from exhibitions which are displayed all over the world at many art galleries.

Tabitha has never been part of any controversial matter or rumors till now. The star reporter has been preoccupied with her professional and private life.

It seems that Soren prefers enjoying her personal life and does not want to merge it with her professional life.

53 years old multi-talented star, Tabitha Soren has beautiful looks and an admirable personality, She stands at a tall height of 6 feet 2 inches. Also, her body weight is nearly 68kg.

Furthermore, Soren has blue eyes whereas her hair is brown.

Nevertheless, the celebrated photographer has never mentioned other physical details in the public yet.

Regarding her social media presence, Tabitha Soren is an active personality on social media. Tabitha has more than 11.6k followers on her official Instagram account @tabithasoren.

She is also active on Twitter with around 5.8k followers.

Moreover, Soren is also available on Facebook with nearly 2.7k fans and supporters.