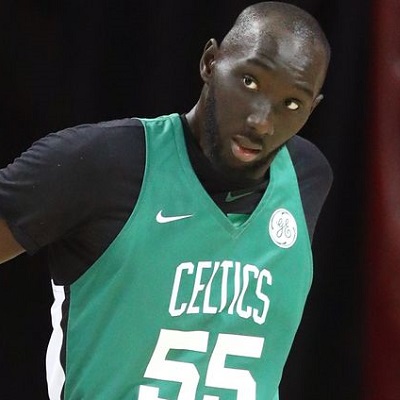 Tacko Fall might be currently single. Also, he has not been linked with anyone. He is busy in his career rather than being in a relationship. He is tall and handsome guy, so he will definitely find the perfect one.

Who is Tacko Fall?

Tacko Fall is a professional basketball player from Senegalese who is currently playing for the Boston Celtics of the National Basketball Association (NBA). He is one of the tallest living people in the world. He went undrafted in the 2019 NBA draft. Later he signed a deal with the Boston Celtics.

He was was born on December 10, 1995, in Dakar, Senegal. He moved to the United States from Dakar at the age of 16. Tacko was born to mother Marianne Sene but information about his father and siblings is not available. He was interested in basketball since his childhood.

He is a Nigerian native. Tacko holds Senegalese citizenship and his ethnicity is African American.

He attended Liberty Christian Preparatory School in Tavares, Florida. He committed to the University of Central Florida in Orlando, who had officially signed him on October 28, 2014

Initially, he played for the Knights as a center and became the tallest player in college basketball after N’Diaye declared for the 2016 NBA draft.

In 2017, he was named American Athletic Conference Defensive Player of the Year and was declared for the 2017 NBA draft with the possibility of returning to Central Florida.

Moreover, he helped lead the Knights to the NCAA Tournament and secured their first victory in program history with a win over VCu. In the final game, he recorded 15 points and six rebounds, while the UCF lost to Duke 77-76.

He scoring six points in his first game alongside four rebounds in his second game he tallied twelve points for his first double-digit scoring game, alongside another rebound. Also, Tacko had one blocked shot in each of his first two games.

He won the AAC Defensive Player of the Year in 2017 and became the third-team All-ACC in 2019.

He has an estimated net worth of around $200k and he has earned that sum of money from his professional career. Also, he signed a 1 year / $898,310 contract with the Boston Celtics which includes an average salary of $898,310. Moreover, he also earns an additional amount of cash through endorsement deals and sponsorship.

His height is 7 feet 5 inches (2.29 m) tall and body weight of 141 kg. He has an athletic body build. His shoe size is 22. His height was purportedly still growing around his senior year, making him the tallest high school basketball player in the country. He was one of the most highly scouted high school basketball centers in the nation due to his height and reach.