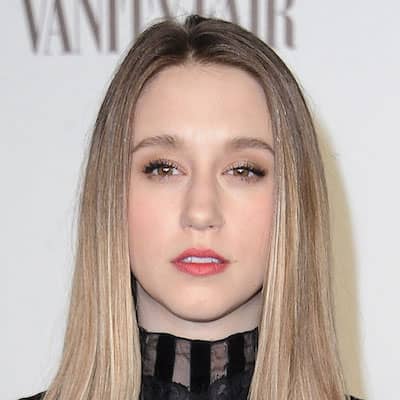 I was hoping, actually, that being on the other side of the camera in a scary movie, see how it's filmed and maybe you won't be as scared next time you watch one... didn't really work out! Because I know it's fake, but I just get so into it

I get scared easily, so I'm not one for just sitting down with a bowl of popcorn and watching horror stories. But, I mean, I'm learning more. Maybe one day I'd like to be able to watch them

I can't say that I fully relate to things that I play. Sometimes it's nice to spend half the day crying, then you don't have to do it in real life.

What is the relationship of Taissa Farmiga?

Taissa Farmiga’s relationship status at present is married. She exchanged vows with Hadley Klein on 08 Aug 2020.

Her husband is a screenwriter/director and they started to date each other in 2014. They shared the news of their romance via Instagram posts for the fans.

This lovely couple shared their special moments via social accounts. Their wedding cake was made by L.A. pastry chef Nicole Bakes Cakes. The bride was seen wearing a bridal mask along with an eyelet-embroidered off-white dress.

Prior to tieing the knot, Taissa was in the news for her closeness to her co-actor Evan Peters in 2014.

Who is Taissa Farmiga?

Taissa Farmiga is an American actress. She is known for seeing in Higher Ground, American Horror Story: Coven, The Final Girls, and more.

Recently, in 2021, she was seen in The Gilded Age (TV Series) as Gladys Russell. Also, her latest movie John and the Hole was released in 2021.

Her birthdate is 17 Aug 1994 and the place she was born in is Readington, New Jersey, United States. The name of her mother is Lubomyra Farmiga and her father’s name is Michael Farmiga.

Her mom is a school teacher while her dad is a system analyst.

As per her academics, she was taught at home only.

Taissa Farmiga has become a popular face of the acting world where she made several screen appearances. Her first movie is Higher Ground as Teenage Corinne Walker, which was released in 2010.

Moreover, she was seen in the TV series Wicked City as Karen McClaren, American Horror Story as Zoe Benson, and 50 States of Fright as Hannah.

Her brief TV credits are,

What is Taissa Farmiga’s net worth?

By the records of 2022, she has a net worth of around $1.5 million (estimated). Her yearly salary and other earnings are not disclosed.

This talented Voice actress is keeping herself away from rumors and desperate scandals.

Taissa Farmiga’s height of 5 ft 5 inches and her body weight is 54 kg. Also, she has hazel eyes and dark brown hair.