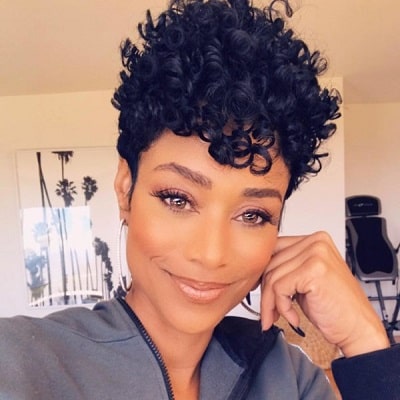 Tami Roman is a married woman. She has been married to her boyfriend of four years Reggie Youngblood on 17 August 2018 in Las Vegas in secret. She admitted on July 30, 2018, that she had miscarried the baby she was going to have with Youngblood.

Previously, she married her longtime boyfriend professional basketball player Kenny Anderson on 26 August 1994 and welcomed two children together – daughters Lyric Chanel Anderson (b. June 1994) and Jazz Anderson (b. October 1996). But the couple divorced on 15 February 2001.

Who is Tami Roman?

Tami Roman is an American reality TV star, model, actress, businesswoman who is well known for starring in ‘The Real World: Los Angeles’ and ‘Basketball Wives’.

She was born on April 17, 1970, in Mount Vernon, New York, USA. Her birth name is Tamisha Akbar and she is currently 49 years old. She was born to African American mother Nadine Buford and Puerto Rican father, who left the family when Nadine got pregnant with Tami.

Her mother remarried in a Muslim family but the marriage did not last long. Then she lost her job and Tami had to live on the road for some time. It became hard for both mother and daughter but later, Tami got the opportunity to work in the MTV on Real World.

She was raised by her single mother in White Plains, New York as an only child. Tami holds American citizenship but ethnicity is African-American/Puerto Rican.

She began her career in 1993 when she was cast on the second season of MTV’s hit reality show ‘The Real World: Los Angeles’. She became the first person to have on abortion on reality television during the season.

It seems Tami has not been awarded and nominated for her work till date.

Tami does not like to be involved in unwanted things in her career and has been successful in keeping herself far from rumors and controversies.

Tami Roman stands a height of 5 ft. 9 inches with black eyes and black hair. Her body measurement is 34-24-35 inches and her bra size is 34B. She wears a shoe size of 10 (US) and her dress size is 6 (US). Her exact body weight is unknown but she has recently loosed 30 pounds.