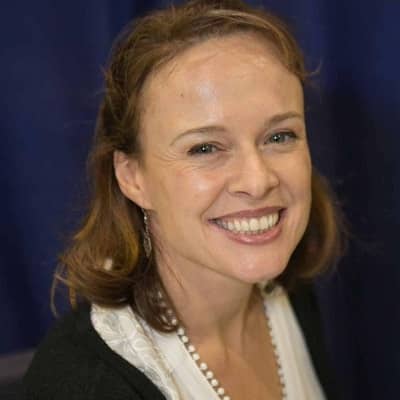 Tami Stronach is a married woman. She is married to Gregory “Greg” Steinbruner on the 30th of April 2010. They are still together and it has been over 11 years since they married.

Together they have a daughter named Maya Steinbruner, born in January 2011.

Who is Tami Stronach?

Tami Stronach is an American actress, Dancer, and professor. She is best known for her role as Childlike Empress in a motion picture, The NeverEnding Story.

In the film, she also debuted her daughter Maya.

Tami was born on the 31st of July 1972 as Tamara Stronach. At present, she is 49 years old and her Zodiac sign is Leo. The birthplace of Stronach is Iran. She is the daughter of late archaeologists David Stronach and Ruth Stronach.

Her father was a notable expert on Persian antiquities. After fleeing the Iranian Revolution, their family moved to California in 1981. She has also a sister named Keren Stronach.

She holds dual citizenship of American and Israeli and belongs to mixed (Scottish and Israel) ethnicity.

Tami began her career as a theater artist on a San Francisco stage adaptation of Winnie-the-Pooh as Piglet in 1983. In the following years, she gave an audition for the motion picture The NeverEnding Story for the role of the Childlike Empress. After three auditions, she was selected in the 1984 film after beating Heather O’Rourke.

After the film, she switched her focus from acting to professional dancing and joined the Neta Dance Company. Eventually, she also formed her own dance company, Tami Stronach Dance in 2000.

Also, she founded paper Canoe, a performing arts company that is highly family-oriented. In 2002, she returned to acting and started performing in a physical theatre company.

She performed in Chambre at La MaMa Experimental Theatre Club in 2006. In the early 2010s, she had co-founded a theatre company called Shoehorn Theater and created a play like Light: A Dark Comedy.

Apart from acting, she is also a professor in New York City.

In 1984, Tami was awarded as Best Actress in Bravo Otto Germany. The following year, he has been nominated in Young Artist Awards for Best Young Supporting Actress in a Motion Picture Musical, Comedy, Adventure or Drama, Die Unendliche Geschichte (1984).

Tami might have accumulated an impressive amount of wealth throughout her career. However, her actual net worth, salary, and other assets are still under review.

The dancer has a well-maintained body posture. She is 5 feet 8 inches tall and her weight is about 58 kg. She has brown pair of eyes and as well a brown hair color.