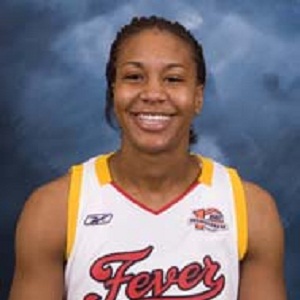 It's just my journey, my journey starting from when I was a little girl and then now of course, through the injuries, just the experiences that I've had, the things that I've learned.

You guys know I'm a very faith-oriented person, so my faith is kind of intertwined through everything that's written.

Who is Tamika Catchings husband?

Tamika is married to Parnell Smith on 7th February 2016.

Her husband Parnell is a former basketball player.

The couple wed at the Skyline Club witnessed by their friends and family.

She revealed that when he proposed to her she was in a sleeping bonnet, glasses, and pajamas.

Who is Tamika Catchings?

She had contributed her entire 15-year career to the Indiana Fever of the Women’s National Basketball Association (WNBA).

She is also known as a prolific scorer close to and far from the basket, as well as a capable rebounder, ball handler, and defender.

Likewise, she is one who has been selected to ten WNBA All-Star teams, 12 All-WNBA teams, 12 All-Defensive teams, and led the league in steals eight times.

Tamika was born on July 21, 1979, in Stratford, New Jersey, the United States to her beloved parents Harvey Catchings and Juanda Catchings as Tamika Devonne Catchings.

She grew up in her own birthplace.

Tamika joined Duncanville High School in Duncanville, Texas where she played basketball for her team.

The Indiana Fever drafted her in 2001.

She was the fastest player to achieve 2000 career points in the WNBA, reaching the milestone in four seasons of play.

Catchings was also entitled the WNBA Defensive Player of the Year in 2005.

Catchings was voted into the 2006 WNBA All-Star Game and got the high voting.

She worked as the president of the WNBA Players Association in the season of 2012.

Moreover, she got a star on The Flag of Hope on May 9, 2016, in recognition of her outstanding basketball career and philanthropic efforts in 2016.

There are no records available regarding her rumors and controversy at the current time.

She is 6 feet and 2 inches tall and she weighs around 77 kg.

She has black/brown color of hair and black eyes.

Tamika seems to be active on Instagram with over 83k followers, and on Twitter with over 76.2K followers.

Also get to know more about the birth facts, education, career, net worth, rumors, height, and social media of different personalities like Paige Bueckers, Ashley Underwood, and Joe Smith (Basketball).