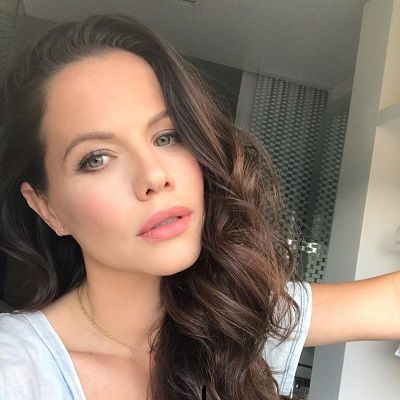 Australia is an island surrounded by water. My fondest memories growing up were trips to the beach, walking around the harbour and playing in the beautiful parks

I always wanted to perform. I remember being 5 years old and telling my parents to sit down as I was going to put on a play for them

Music I can discover a part of myself that I haven't been able to for a long time, and acting is the opposite. I'm in love with both of them and I would never choose one over the other.

They first meet in 2007, when Tammin was in an audition for ‘Albino Farm‘. Then in Jan 2011 Sean and Tammin exchanged rings.

This couple together has two children. Their first daughter was born Lennon was in Oct 2013 and the second daughter Phoenix was born in Jan 2019.

Who is Tammin Sursok?

Tammin Sursok is an Australian actress, singer, and producer. She became popular for her role in the TV series ‘Pretty Little Liars’, Crossing Over and ‘Rules Of Engagement’.

This actress was born on 1983, August 19, in Johannesburg, South Africa with the birth name ‘Tammin Pamela Sursok’. Her father’s name is Daryl and her mother’s name is Julie Sursok.

Tammin holds an ethnicity that is Lebanese and other.

Her family emigrated to Sydney, Australia when she was four. She has a brother ‘Shaun’ and a half-sister, Michelle.

Tammin was brought up surrounded by music as her mother is a classically trained pianist and guitarist. She pursued her interests in acting, music, and dance with the Sydney Youth Musical Theatre.

This beautiful actress studied at the Trinity Speech and Drama College. In her final years of school, Tammin was educated at Ravenswood School for Girls in Sydney.

After completing grade 10, Tammin Sursok landed her first audition for a role in the Australian drama series Home and Away. Tammin released her first debut album Whatever Will Be in 2005.

In 2006, she relocated from Australia to California in order to concentrate on her acting career. The same year she made her little role in her debut film Aquamarine. Sursok portrays Collen Carlton in the American soap opera television series ‘The Young and the Restless’ in 2007.

Later, In 2014, she released a collaboration with singer ‘Joe Brooks’ covering ‘Say Something’.

She sold her previous apartment of two-bedrooms, two-bathrooms in Sydney. The selling price of this property was $1,075,000.

Tammin’s debut was quickly met with criticism from a number of The Young and the Restless viewers. She also told peoples are offended by her American accent she adopted after leaving Australia.

Tammin received bra shaming after sharing one photo of her with family on Instagram. She has had two miscarriages before her daughter’s birth.

Her dress size is 6 US. Her body measurement is 34-25-33 inches. This actress has a tattoo on her wrist.