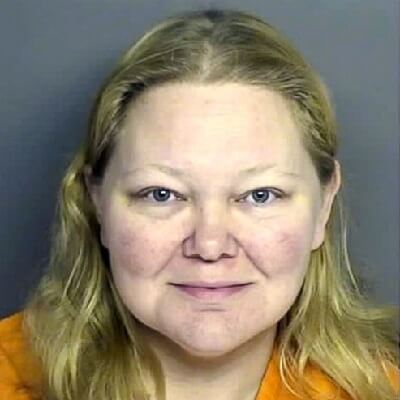 Tammy Moorer is married to Sidney Moorer and they have two children together, Christian, and Nikki. The marriage was not a good one and almost ended after Tammy found out of her husband’s affair with Heather.

However, they stayed together after Sidney accepted many punishments given to him by Tammy for cheating on her.

He had to tattoo her name above his crotch and accounts also said that Tammy handcuffed him to their bed every night and even changed the password on Sidney’s phone to one only she knew.

Tammy Moorer is an American criminal who was also running a travel agency called ‘Magical Vacations by Tammy’. She was involved in the high profile kidnapping case of Heather Elvis along with her husband Sidney Moorer. She and her husband were both convicted for kidnapping and were sentenced to 30 years in prison in October of 2013.

Tammy Moorer was born on the 8th of March, 1972 in the United States of America. As of 2020, her age is 48. She was born to parents Polly Caison (mother) and William Caison (father). She is one of her parents’ two children and has a sister, Ashley Caison.

Moorer has not revealed much about her childhood days. Her ethnicity is Caucasian.

The Disappearance of Heather Elvis

This case was a very high profile case that attracted a lot of media attention. It involved the disappearance of a young 20-year-old Heather Elvis and the primary suspects were Tammy and Sidney Moorer who were later found guilty on charges of kidnapping and conspiracy

Heather Elvis was a young woman working as a waitress at a local restaurant, where she met Sidney Moore; a repairman and husband to Tammy Moore; and they had an affair. Evidence confirms that Tammy found out about her husband’s affair shortly afterward and even sent some confrontational texts to Heather. Tammy was furious with the affair even going so far as to handcuff her husband to their bed at night and making him tattoo her name above his crotch.

Heather disappeared on December 18th of 2013. Her whereabouts after 1:45 a.m. of December 18 have not been established even until now, almost 7 years after her disappearance. Later, police found Heather’s car at the Peachtree landing boat launch. The police also found video footage from security cameras that showed Sidney; Tammy’s husband; going to and returning from the road to the boat launch.

The Moorers were initially arrested on charges of Murder and kidnapping but the murder charges were later dropped as Heather’s body was not found. The case took a rather long time and Tammy was sentenced late in October 2018 where the court found her guilty on the charges of kidnapping. A lot of evidence, with threats from Tammy her overjealous nature after finding out about the affair and the security camera footage which showed Sidney Moorer’s car going to and from the location where Heather’s car was found all supported the claim that the couple was the ones responsible for the disappearance of Heather.

The sentence of 30 years, given to Tammy came more than 4 years after the initial arrest, and charges of kidnapping and murder were pressed on the Moorers. Tammy, however, maintained her innocence in court even after the verdict.

The verdict was long due and most people agree that the Moorers are the ones responsible for Heather’s disappearance. The victim’s family however demanded that and even stricter sentence be handed to Heather in light of her crimes. The truth about what happened to Heather is still unknown, even almost 7 years after the incident.

Sidney was given a lighter sentence of 10 years while Tammy was sentenced to 30 years. They both are still carrying out their sentences as of 2020.

Tammy had her own Travel Agency by the name of Magical Vacations by Tammy. According to WMBF News, her business license to open a travel agency was approved just weeks before the disappearance of Heather Elvis. Her husband Sidney Moorer worked as a welding contractor and they had two children together.

Tammy Moorer and her husband are not particularly rich or even famous and their names only come up in connection to their sentence for the kidnapping of Heather. So, we can’t estimate her net worth or salary.

Moorer has blonde hair and blue eyes. She has not revealed her height and weight.

She was not active on social media prior to her conviction.

You may also like to read more about the Bio, Career, Net Worth, Relationships, and more about Dolores Fonzi, Curtis Conway, Mellody Hobson, etc.

Believe it or Not! British Sun’s page 3 model Chloe Ayling drugged, kidnapped in Milan and then released-Find the complete story here!