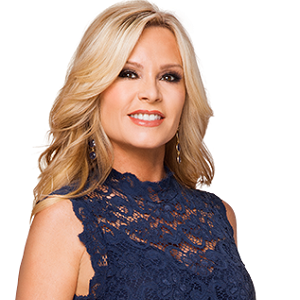 Tamra Judge is married thrice till today’s date having four children. She welcomed her first child Ryan Vieth being married to her first husband Darren Vieth. Their relationship didn’t last long as they have planned and got divorced in 1990.

For several years she lived her life single when her first marriage didn’t work out. Later on, she was spotted with Simon Robert Barney. After dating for several years they got married on 23rd May 1998. They lived together for 13 years and had three children, Sidney Barney, Sophia Barney, and Spencer Barney.

Her marriage with Simon also got dissolved in 2011. After two years of her divorce, she got married to Eddie Judge on 15th June 2013. By profession, Eddie Judge is a businessman.

Their marriage was recorded in Tamra’s OC wedding. There’s no information about this lovely couple separation or divorce.

Who is Tamra Judge?

Tamra Judge, Sweet and sexy Hollywood reality star who is best known as the hottest housewife on Bravo’s Housewives of Orange County.

She has also appeared in her own spin-off, Tamra’s OC Wedding. She is also a licensed realtor.

Tamra Judge was born on 2nd September 1967 in California, USA. She has one sibling named Kenny Barney and grew up with him in California.

She was happily a band geek and used to play the clarinet in junior high. She hasn’t shared much information about her childhood life, education, and her parents.

Tamra Judge became a television figure when she appeared in Bravo’s The Real Housewives of Orange County which showed the personal and professional lifestyle of women living in Orange Country, California. Before that, she used to work as a licensed realtor in Coto de Casa as well as in Ladera Ranch.

She had also worked on at Burger King and it was her first job. With the success of the reality show, her career also took on a height. She got well known for her hottest housewife performance. She earns about $350000 per season for her appearance in the television reality show, The Real Housewives of Orange.

Besides her television personality, she had also launched a cosmetic line working together with her plastic surgeon Dr. Ambe. Along with her husband Eddie Judge, she also owns the C.U.T fitness gym.

Her current net worth is $2 Million which is set to soar high with her long-term future plans.

Although Tamra is being married for three years and more with his husband Eddie Judge, he is rumored to be gay. But this rumors is directly denied by Tamra Judge with the fact that why she needs to be married to the gay person.

Tamra Judge has a height of 5 feet 3 inches tall. Her hair color is blonde and eye color is dark brown. Her weight, shoe size, dress size, and other body measurement are unknown.