Executive Producer/Emmy Award Winning Host is married and a mother of one.

Tamron Hall is a married woman. Tamron recently revealed on 26th February 2019, Monday that she is expecting her first baby at the age of 48. She surprised everyone by posting a video on her Instagram showing off her 32-week belly bump. Then in April 2019, she gave birth to a boy, Moses.

Along with her pregnancy news, she also revealed that she has secretly married Steven Greener, a music executive. However, she did not open up about her wedding and marriage details.

Previously, she was in a relationship with her longtime boyfriend Lawrence O’Donnell, a TV host. The couple began dating each other back in 2011 and separated after dating for a couple of years. 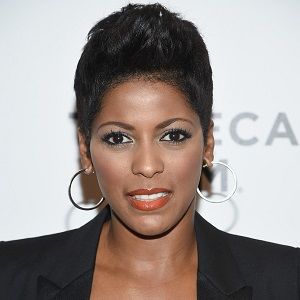 If someone says, 'I love that lipstick,' I will always try to answer, honestly, if I know what color it is. It's a connective tissue.

Someone - a man - advised me not to become a news anchor because my eyelashes were too long, and they would distract the viewers.

One of my favorite memories was one time Prince picked me up and said we were going to Michael Jordan's birthday party.

Who is Tamron Hall?

Talking about his early life, Hall was born on September 16, 1970. She is of American nationality and belongs to the African-American ethnicity.

She experienced his childhood in Luling, Texas, USA.

She is the daughter of Mary Newton(mother) and her father’s name is unknown. She had a sister named Renate, who was murdered in her house in Houston. It was also reported that her dead body was floating in her backyard pool. However, the crime is said to be made by one of her past abusive boyfriends.

As per her education, Hall completed her high school education in her native town.

After high school graduation, she attended Temple University and graduated with a Bachelor of Arts degree in Broadcast Journalism.

After university graduation, Hall moved to KTVT in Fort Worth, Texas, and began working for WFLD-TV in Chicago, Illinois. She worked for the channel from 1997 to 2007.

As a former Chicago resident, she frequently reported on issues related to Chicago politics.

She held several positions at WFLD, which included general assignment reporter, consumer reporter, and she was the host of the three-hour segment Fox News in the Morning.

She joined the national news network MSNBC in 2007. She also landed a one-on-one interview with Barack Obama before he announced his run for the presidency in 2008.

Tamron Hall is the first African-American woman to co-anchor the Today show.

Her success in her career path has paid her well financially. Her net worth is calculated at $7 million. In addition, this TV personality is receiving an annual salary of $1 million.

Talking about the rumors and controversy, there was a rumor that she is going to leave the show.

She has faced many controversies but she left NBC News which was one of the biggest controversies of her life till now. There was also a rumor that she is dating a guy named Tony.

Tamron Hall has a height of 5 feet 9 inches. Her body weighs 67kg. Besides this, her hair color is black. Also, her eye colors are black.

Talking about her body measurement, her body figure measures the size of 38-27-37 inches. Additionally, her dress size is 10, and her shoe size is 9.5(US).