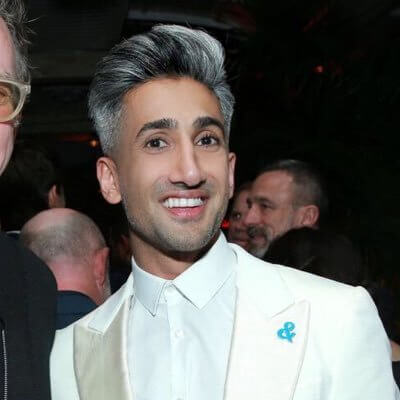 I love a wild animal print. Not just a leopard print - I'm talking about a tiger or zebra print, too

If you can't make an effort in what you're even wearing, you're probably not going to make the effort to create a multi-million dollar company.

Tan is a married man. He is currently married to Rob France. He is an illustrator and nurse. The couple met on a dating website. Although the exact date of their marriage remains unknown, they have been married over a decade.

They have expressed their desire to have children through surrogacy in the future. Tan also revealed that he has desires to have a large family with six children. They live in Salt Lake City, Utah.

Who is Tan France?

Tan France is an English fashion designer and TV personality. He is best known as the fashion expert in the Netflix series, ‘Queer Eye’. With his appearance in the show, he became one of the first openly gay South Asian men on a major show and also one of the first out gay Muslim men on western television.

Tan France was born as Tanveer Wasim Safda in Doncaster, South Yorkshire, England, on 20 April 1983. As of 2020, his age is 37. Although he has not revealed the identities of his parents, they were Muslim Pakistani. According to  his memoir, his experience was tough being raised in a strict Muslim household where homosexuality was viewed very negatively. Moreover, he also faced physical and verbal racism growing up causing him alienation. His parents had emigrated from Pakistan to England before he was born, and he’s British by birth.

Tan was interested in fashion from a young age. By the age of thirteen, he had already learned how to construct and embellish a denim jacket. His ethnicity is a Pakistani Muslim.

Talking about his education, France went to Hall Cross School. Following his graduation, he went to Doncaster College to study fashion.

Tan France started his career working for Zara and Selfridges & Bershka as a designer and director. Later, he worked at Chanel and learned more about manufacturing.

He worked as the company director at Shade Clothing before opening his solo fashion line in 2011 called ‘Kingdom & State’. The brand’s clothing is designed to meet Mormon clothing guidelines. Later, he founded two smaller apparel brands. ModCloth and Forever 21 purchased his designs. In 2016, he became the co-founder, fashion designer and CEO of Rachel Parcell Inc clothing line, sold at Nordstrom.

Tan officially retired and sold his businesses. Later, Netflix contacted him during his transition from a fashion designer to a social media personality. He became the fashion expert in ‘Queer Eye’ which premiered in February 2018.

In 2019, he appeared in the music video of Keala Settle’s “This Is Me (The Reimagined Remix)” and a year later, he appeared in Taylor Swift’s ‘You Need to Calm Down’. Moreover, in 2020, he featured in a special charity edition of The Great British Bake Off to raise funds for Stand Up To Cancer.

In 2020, Netflix announced that France would be co-hosting the new Netflix series titled ‘Next In Fashion with Alexa Chung’. He is the founder of women’s clothing line, ‘Kingdom & State’.

Tan France has an estimated net worth of around $5 million. He has earned money as a fashion designer, business owner, and TV personality. There is no information about his annual salary. Fashion designers earn over $65k per year on average whereas TV personalities earn around $110k per year.

France stands at a height of around 5 feet 9 inches. He weighs around 70 kg. His hair color is salt and pepper and his eyes are dark brown in color.

Tan has not been involved in any controversies. He has been able to keep himself away from any type of controversy and scandal. So far, he has not done anything controversial in his career. Similarly, there are no rumors about him of any kind.

You may also like to read the Bio, Career, Body Measurements, Net Worth, Social Media, Relationships, and more about Stacie Zabka, Molly Hopkins, Teddy Riley, and more.