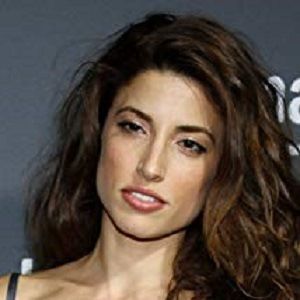 The cool thing about working and meeting a lot of people through your acting is that you never know who you might work with, in the future

I would really like to do a straight action movie that's hardcore - heavy action, like 'The Expendables' or 'Fast Five'

I have a very high tolerance for gore and blood. I am, like, the perfect horror movie viewer because I do not get scared very easily. I can really stomach anything so, as a result, I have watched a lot of really disgusting stuff that I should probably never have seen.

Talking about her relationship, previously, Tania Raymonde had a boyfriend and was dating Jeff Goldblum in 2009 and 2010 but they broke up.

She is now engaged to Zio Ziegler who is an artist and a painter.

Who is Tania Raymonde?

Tania Raymonde is an American actress, she is well known for her roles as Cynthia Sanders in the TV series Malcolm in the Middle.

Likewise, she also appeared on the ABC series Lost, as Alex Rousseau from 2006-10.

Tanina was born in Los Angeles, California, the United States on March 22, 1988, to parents Jon Katz and Anne-Marie Katz. There is no information about her siblings.

Talking about her profession, Tania Raymonde’s first television role was as Alice/Young Syd in “Syd in Wonderland”, an episode of the TV series Providence. She subsequently appeared on other TV series, including Brother Garcia, The Nightmare Room, That’s So Raven, The Guardian, Lost, Medium, Malcolm in the Middle, and NCIS.

During 2002, she also starred in the film Children on Their Birthdays, her first feature film role. During 2003 she also played Lauren O’Keefe in the sitcom The O’Keefes. Similarly, she is most known for her work on the ABC drama Lost, where she also played Alex Rousseau, the adopted daughter of Benjamin Linus, played by Michael Emerson.

Besides that, she also appears in the music video for Maroon 5’s “Won’t Go Home Without You.”During  2013, she was cast in Chicago P.D., a spin-off of the NBC series Chicago Fire. However, she, along with co-star Scott Eastwood, left the show for creative reasons.

In the same year 2013, she also portrayed convicted murderer Jodi Arias in the Lifetime original movie Jodi Arias: Dirty Little Secret. Currently, she is working on her first feature as a director—a crime thriller she wrote set in Orange County called Little Saigon.

On talking about her lifetime achievements and awards, she won Best of the Fest for Ensemble Cast for Trophy Kids. Likewise, she won the award for Best Actress for The Garage.

Tania Raymonde: Salary and Net Worth

There is no information about her salary. Her net worth is around $ 3 million.

On talking about her body measurements, Tania Raymonde has a height of 5 feet 5 inches. Additionally, she weighs is 55Kg. Furthermore, she has a measurement of 34-23-34 inches respectively.