Tanita Strahan is currently in a relationship. She is dating her boyfriend, Calenta Mincey. However, the details on how and when they started dating are unknown. Hope they will be together in the future as well.

Michael Strahan is currently single. However, he was previously married to, Wanda Hutchins, Tanita’s mother in 1992 and have two kids together.

The couple was blessed with their first daughter, Tanita the same year they married and three years later, gave birth to their second child, a son Michael Anthony Strahan Jr. After the birth of Michael, the pair went through a bitter dispute which led them to divorce in 1996. Three years later in 1999, he got married for the second time.

After that, he married his second wife whose name has not been revaled yet. He is blessed with twin girls Sophia and Isabella Strahan but got divorced from his second wife in 2006. Moreover, he got engaged Eddie Murphy‘s ex-wife, Nicole Mitchell Murphy in 2009 and 5 years after their engagement, they called off their engagement in 2014. 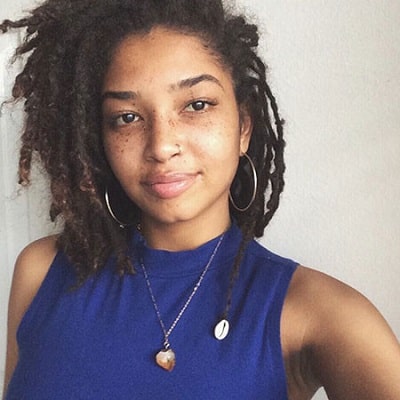 Who is Tanita Strahan?

Tanita Strahan isis a visual artist. She is famous as the daughter of a famous football player Michael Strahan who spent all of his 15-year career in the National Football League (NFL) with the New York Giants.

She was born on November 10, 1991, in Germany. She was born to her father Michael Strahan and her mother Wanda Hutchins. Similarly, her grandfather Gene Willie Strahan was a Major of the US Army and a boxer before he retired.

Whereas her grandmother, Louise is a basketball coach. In addition, she has one baby brother, Michael Anthony Strahan, Jr., and two half-sisters as a sibling. She is the oldest child of her parents. She is interested in painting and she is self-employed.

She completed her education with a degree in Associate of Arts – AA, Design and Visual Communications from the Fashion Institute of Design & Merchandising in Los Angeles, California.

She is a visual artist who is currently self-employed. She uses watercolor, ink, and digital art, media for her art purposes. Apart from being the daughter of a famous footballer, she has kept other information secret.

Her exact net worth is unknown. However, according to Payscale, an average visual artist earns around $45,577 per year.

Talking about her father, he is a well-known former NFL star who played in the league for more than 15 years. He began his career by playing for his college team at Texas Southern University. He was selected into the All-America first team, when he was a senior, with the Texas Southern Tigers. In 1993, he was drafted into the New York Giants and spent his whole career at the team establishing himself as one of the best players of his generation, and retired in 2007.

On April 19, 2016, he left the show and started to work on Good Morning America. Strahan won a Daytime Emmy twice for “Outstanding Talk Show Host” during his time at the show.

Moreover, ABC announced Michael as the host of the Summer revival of $100,000 Pyramid in 2016 which aires on Sunday night along with the Steve Harvey-hosted Celebrity Family Feud and Alec Baldwin-hosted Match Game.

Her father has an estimated net worth of around $65 million and has a salary of $17 million according to Bankrate.

Tanita has black eyes and black hair but further information about her height, shoe size, dress size, etc. is not available.

Media Personality Michael Strahan! His Family, Personal Life, Divorce; Is He Dating? Who is his GF?